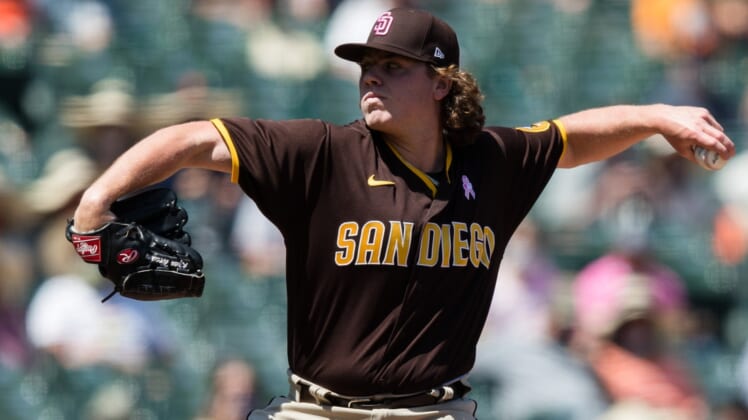 The Padres, who had been in an offensive slump, finished with season highs of 16 hits and seven extra-base hits.

Cronenworth followed a lead-off single by Wil Myers by pulling a Cueto slider 455 feet into McCovey Cove for a quick 2-0 lead. Cronenworth, who had kept the Giants off the board with a pair of defensive plays in the bottom of the first, became only the fourth Padre ever to reach McCovey Cove and the first since 2014.

Tatis then followed a double by Victor Caratini with a 454-foot blast to left center. It was the fourth-longest home run of Tatis’ career.

The Padres added their fifth run against Cueto on consecutive singles by Manny Machado, Eric Hosmer and Myers in the third, although Cueto worked out of a bases-loaded, no-outs jam to avoid further damage.

Paddack, who, like Cueto, was activated from the injured list Sunday morning, allowed four hits and a walk in three scoreless innings. It was Paddack’s first outing since April 20. He had been on the IL due to undisclosed “medical reasons.”

Weathers (2-0) followed and allowed a hit and a walk with three strikeouts over three innings to earn the win.

Cueto (2-1), who had been out with a lat strain, gave up five runs on eight hits and a walk with two strikeouts in three innings. After he left the game, Cueto was being examined with the possibility he aggravated the injury.

The Padres turned a wild throw by Giants reliever Jose Alvarez on a potential double-play comebacker into a four-run eighth. Caratini scored on the error. Trent Grisham then drove in two runs with a triple off the glove of diving left fielder Mike Tauchman and Hosmer singled home Grisham.

The Giants got on the board in the bottom of the eight off Drew Pomeranz on a walk drawn by Brandon Belt, a double by Evan Longoria and a sacrifice fly by Brandon Crawford.