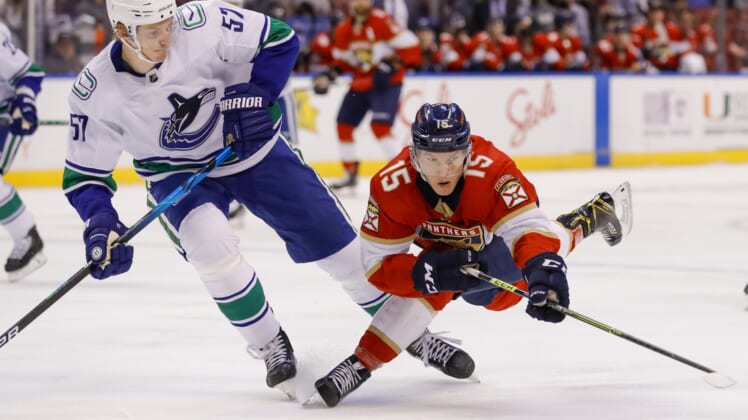 The Florida Panthers, who have the best home record in the NHL, successfully defended their ice once again, using two goals and an assist from Sam Reinhart to defeat the Vancouver Canucks 5-2 on Tuesday night in Sunrise, Fla.

Florida improved to 19-3-0 at home, also getting one goal each from Aaron Ekblad, Maxim Mamin and Aleksander Barkov. Ekblad, Frank Vatrano and Anton Lundell added two assists each.

Panthers goalie Sergei Bobrovsky made 42 saves, improving his record this season to 17-3-3.

Jason Dickinson and Juho Lammikko scored for the Canucks, who were playing their first game since Jan. 1 due to a pair of COVID-related postponements.

The Canucks had their nine-game point streak snapped, falling to 8-1-1 in their past 10 games.

The Panthers are on a seven-game points streak (6-0-1). They entered the game leading the league in home-game goals (4.4 per contest), and they improved their average.

The hosts’ scoring barrage started with the game’s first two goals, both in the first period.

Ekblad scored on a slap shot beyond the right circle at 5:18. Reinhart, in his first game back from COVID protocol, made it 2-0 with his deflection of a Radko Gudas shot at 6:24.

Vancouver cut its deficit to 2-1 with 11:31 gone in the first as Dickinson took a pass from Conor Garland and scored from the left circle.

The Panthers dominated the second period with all three goals, starting with Reinhart on a power-play deflection off his body from a Jonathan Huberdeau shot at 8:46.

Mamin then scored at 9:12 while playing five a side, getting a gorgeous between-the-legs pass from Lundell, who had his back to the net. Mamin then lifted the puck over Demko with a backhander.

Barkov, taking a long Ekblad pass from deep in his own end, closed the second-period scoring with a short-handed breakaway at 19:00. It was Barkov’s third short-handed goal in his past six games.

Vancouver cut its deficit to 5-2 at 4:34 of the third period on a rebound goal from Lammikko, a former Panther.