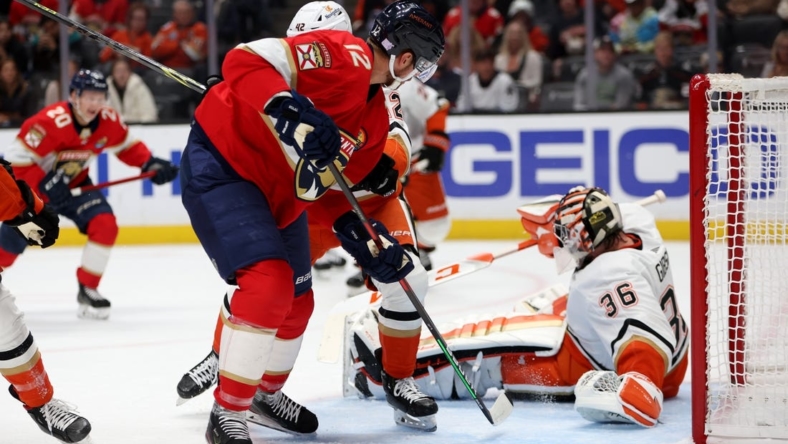 Sam Reinhart snapped a third-period tie with his first goal of the season, then added an empty-netter, as the visiting Florida Panthers won 5-3 over the Anaheim Ducks on Sunday night.

After recording a career-high 33 goals last season, Reinhart needed 13 games for his first of 2022-23. Amid a net-front scrum, Reinhart got his stick on the puck and beat Anaheim’s John Gibson (43 saves) to break a 2-2 tie just 2:55 into the third.

Meanwhile, ex-Duck Brandon Montour had a goal and assisted on Carter Verhaeghe’s fourth goal in three games in the first period, Sam Bennett’s goal with 11:50 left in the third and Reinhart’s empty-netter to complete the four-point night. Spencer Knight made 32 saves for the Panthers, who finished 2-2-0 on a western road swing.

Florida played without Matthew Tkachuk (team-high 17 points), who served the first of a two-game suspension for a high stick on Los Angeles goalie Jonathan Quick during Saturday’s 5-4 defeat.

Ryan Strome posted a goal and assisted on Adam Henrique’s tally, while Isac Lundestrom converted a penalty shot with 1:14 remaining in regulation for a shorthanded goal for Anaheim, which had won three of four. The Ducks entered allowing an NHL-high 478 shots on goal — and have yielded at least 44 in four straight games.

The Panthers outshot the Ducks 17-11 during the first period. On the power play, Montour’s drive from just inside the blue line found the stick of Verhaeghe, who deflected the puck in with 8:29 left in the opening frame.

Montour got one of his own just 2:51 into the second period. After gaining possession of the puck in the Anaheim zone, he spun toward the blue line, then threw it toward the net, and past a seemingly unprepared Gibson.

However, the Ducks turned up their own pressure. Strome struck a shot that Henrique got enough of his stick on to redirect by Knight, eight minutes into the second. Some 27 seconds later, Strome corralled the puck amid traffic, and converted into an open portion of the net to tie the contest.