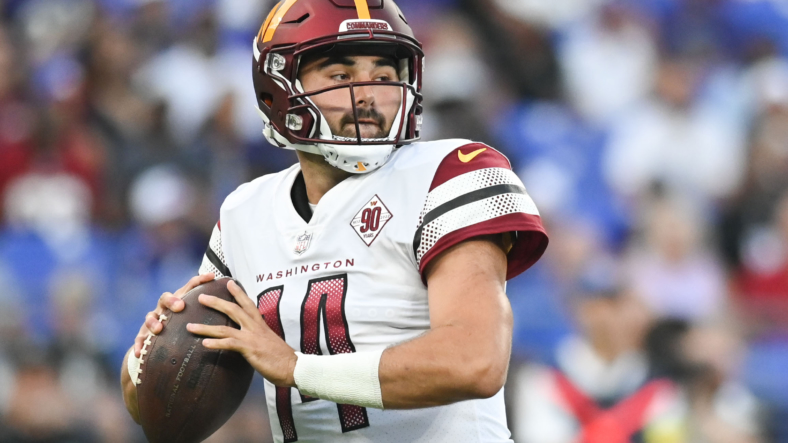 The Washington Commanders took steps toward improving their team in the short term by trading for Carson Wentz this past offseason. They also made sure to invest in their future by selecting North Carolina quarterback Sam Howell in the fifth round of the 2022 NFL Draft.

Wentz is entrenched as the starter heading into the season, but the possibility of Howell elevating to QB2 status, surpassing Taylor Heinicke isn’t that farfetched.

After his preseason effort, it’s Howell who’s been generating some hype as of late.

Howell also added 94 rushing yards and two touchdowns in his three preseason games, showing off his ability to move the chains with his feet.

All three Commanders quarterbacks have above-average mobility, yet aside from the Pro Bowl level play Wentz has displayed in the past, there’s been no indication of the 29-year-old quarterback returning to that state any time soon. Instead, it’s Howell who has the highest ceiling in the QB room.

Sam Howell could be the future in Washington

Don’t look now, as Howell, 21, still has a lot of refinement to work on before he’s ready to be an NFL starter. Yet, if the Commanders experience injuries at the quarterback position, Howell has at least shown the moment won’t be too big for him.

For now Howell’s given general manager Martin Mayhew something to think about as the team prepares to trim the roster from 80 players all the way down to 53 by Tuesday’s cutdown date. Is Heinicke expendable with Howell’s recent emergence? Or does coach Ron Rivera sleep better at night, knowing he has a veteran with 16 starts under his belt as the current QB2?

Based on the fact that Heinicke still helped lead his team to a 7-8-1 record a season ago, his roster spot seems secure, but that doesn’t mean he’s off limits in trade discussions.

Howell may not be ready to be a starter just yet, and who knows, he may not be the backup either, but he at least looks to be worth the fifth-round selection the team invested in him back in April. For now, that’s a win. If he can eventually become QB2 on the depth chart, he will have already surpassed expectations. Becoming a starter? It’s not out of the question, but he just needs to continue developing, learning everything he can from the two veteran QBs ahead of him on the depth chart.