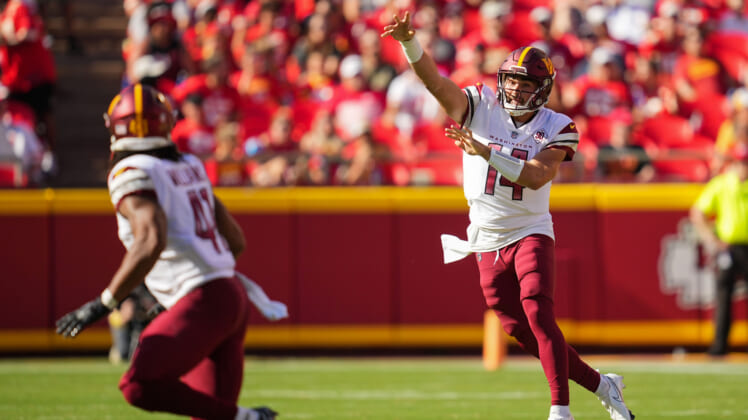 After getting a chance to make his rookie preseason debut in Week 1, the buzz began to build around Washington Commanders quarterback Sam Howell. Selected in the fifth round, with the 144th pick out of North Carolina back in April, Howell was once viewed as a top quarterback prospect during his college days.

His stock slipped during his final season with the Tar Heels, and that’s why he fell to the fifth round after once being projected as a potential first-round pick. But the Commanders don’t care about projections or what others thought of their newest QB, they’re just happy to have the 21-year-old project.

Before we get too deep here, let’s remind everyone Howell is a rookie, he’s just 21, had 143 players selected before him, and shouldn’t have too high expectations in 2022.

Now that we got that out of the way, how Howell got here doesn’t matter. He’s set to make the Commanders’ 53-man roster no matter what. From here, it’s all about his development, as his roster spot won’t be guaranteed in 2023.

That’s why it’s important for Howell to flash his traits whenever he can this preseason. It’s OK for him to make mistakes. That’s expected for young players making the transition to the pro level. More important will be how he grows and moves on from his mistakes, ensuring he won’t make them again.

Howell throwing the game-sealing interception obviously wasn’t ideal, but he also had some bright spots, such as on this zero blitz, where he quickly identified the open man to get the first down. For every good play we say of the first-year pro, he also had a bad play to offset the glimpses of hope. That’s not uncommon for developing quarterbacks with limited experience.

For now, Howell looks like he has some traits that help him survive in this league, but we all know he’d prefer to thrive. He’ll have to continue proving himself to make his mark.

Though he may have had an outside shot at surpassing Taylor Heinicke as the backup, even if it seemed unlikely, it appears as though he’ll spend his first season as the third-string QB, running the scout team, and that is a much more fair expectation for a fifth-round rook.