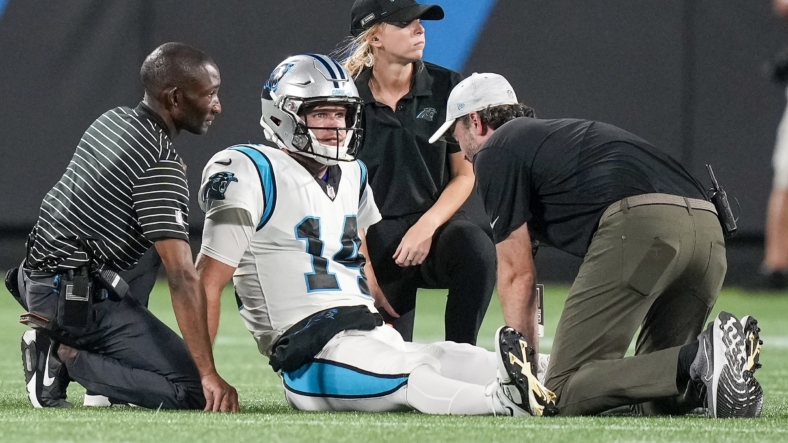 After the Carolina Panthers officially named Baker Mayfield as their starting quarterback, it left Sam Darnold as the primary backup. Since he was set to ride the bench for the foreseeable future unless Mayfield faltered, the Panthers left Darnold in their preseason finale a lot longer than usual.

Darnold played from the end of the first quarter to the final minutes of the third quarter, before having to be carted off with a leg injury on his final play.

The sight of the injury wasn’t pretty, with Darnold’s foot/ankle getting trapped under the defender who made contact with him during the play. It wasn’t difficult to see Darnold’s ankle twisting in a direction it’s not supposed to be in. This quickly led to thoughts of him possibly being set to miss an extended stretch of time.

However later after the game, a report suggested Darnold may just be dealing with an ankle sprain.

On Saturday afternoon, NFL Network’s Ian Rapoport shared the results of Darnold’s MRI, and it confirmed a high ankle sprain, where the QB is expected to miss anywhere from 4-6 weeks of action. It’s a setback, but not as bad as could be, had a bone broken. Carolina’s already seen Matt Corral‘s Lisfranc injury sideline him for the season, so for Darnold’s injury to be more short-term, that’s a win.

PJ Walker will now be Mayfield’s backup. Not exactly an ideal situation, or anything close to what coach Matt Rhule envisioned a few weeks ago.

The Panthers begin their season with a revenge tour for Baker Mayfield, taking on his former team, the Cleveland Browns, in Week 1. It’s anyone’s guess how Mayfield will perform with his new team, with new receivers, new coaching staff, and an entirely different offense.

Yet, the Browns were willing to move on from the former No. 1 overall pick for a reason. He had worn out his welcome thanks to inconsistent play.

There’s a chance he could do so again in Carolina. If so, Darnold would be the one they call on.

While Darnold’s not going to be available, likely for at least the first four weeks of the season, it’s possible he becomes a more appealing option once he’s 100% healthy again.

With the Panthers hitting a tough stretch of games starting in Week 3, they could be looking to make a QB change should they go on a four-game losing streak as they face four consecutive playoff teams from a season ago from Week 4-7. Darnold should be healthy to return at this point, and he may be just what they need to close out their year on a high note.

For now, it’s all about rehab and recovery for Darnold, but there could be a time later on when he’s thrust back into the starting lineup, should Mayfield start to struggle.