Burns has a two-round total of 17-under 127 at TPC Craig Ranch in the Dallas suburb of McKinney, Texas. He sits two shots ahead of Sweden’s Alex Noren.

Burns, 24, won the Valspar Championship in Palm Harbor, Fla., two weeks ago for his first PGA Tour title. He could become the first player to capture his first two wins on the tour in consecutive starts since Colombia’s Camilo Villegas did so in the 2008 BMW Championship and Tour Championship.

“Everything out there felt great,” he said. “Just feel like we got into a good rhythm throughout the round. Made a run right there on the back nine, and so it was nice to be able to finish it off with two birdies at the end.

“Good way to end the day. Just trying to get a good game plan out here for (Saturday) and let’s see what happens.”

Asked how the Valspar win has affected his confidence, Burns said: “The biggest thing for me is just seeing the hard work that we put in it, start seeing results from that. A lot of times you don’t know how long the results are going to take. Golf is a fickle game. 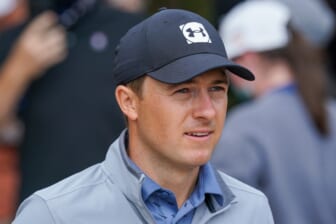 “It’s cool to see some feedback from the progress we’ve made back home and seeing it in tournament play as well.”

Noren also avoided bogeys on Friday, and he had two sets of back-to-back birdies.

“The fairways are wider which I like, so I’ve never hit so many fairways I think,” Noren said. “I’m not always the straightest, so this helps.

“Playing from the fairway a lot helps. I played the par-5s nice this week … and the putting has been there, so it’s been a good week so far.”

Defending champion Sung Kang of South Korea is tied for 27th at 8 under following 69 in the second round. Japan’s Hideki Matsuyama, playing his first event since winning the Masters, is tied for 53rd place at 6 under after carding a 70 on Friday.