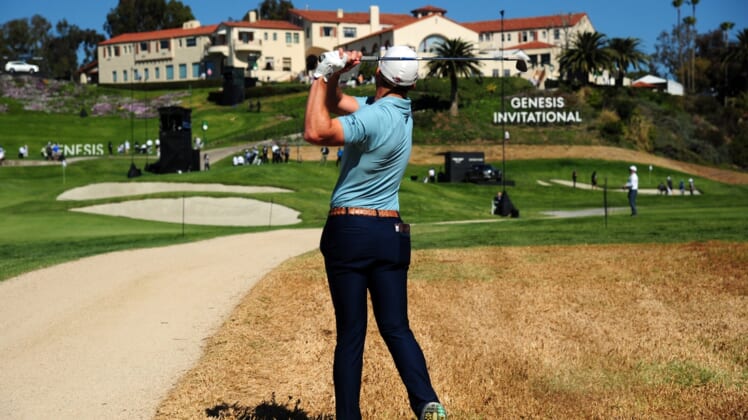 Feb 19, 2021; Pacific Palisades, California, USA; Sam Burns plays his shot on the rough of the ninth hole course during the second round of The Genesis Invitational golf tournament at Riviera Country Club. Mandatory Credit: Gary A. Vasquez-USA TODAY Sports

Burns followed his opening 7-under 64 with a 66 on Friday as the 24-year-old seeks his first career PGA Tour victory at one of the Tour’s most iconic venues.

He will begin the third round five strokes in front of world No. 1 Dustin Johnson, Jason Kokrak, Tyler McCumber and Chile’s Joaquin Niemann. Another shot off the pace are Wyndham Clark, Max Homa and Jordan Spieth.

It is a lofty position for the 149th-ranked Burns. The Genesis Invitational features eight of the top 10 players in the world rankings, and as an event with elevated status, the winner receives a three-year Tour exemption along with 550 FedEx Cup points.

Riviera has played host to this event 57 times and was the site of two major championships. Burns’ 130 shots through 36 holes matches a feat accomplished only twice before.

“I’d like to think that I have all the tools to win out here,” said Burns, who was in weekend contention earlier this season at the Safeway Open and the Farmers Insurance Open before fading. “Obviously there’s a lot of good players, really, really good players.

Burns began his day on the back nine at Riviera and promptly birdied the short par-4 10th hole. He made three birdies on his first nine, two more on his second nine and scrambled for par on his next-to-last hole of the day to sign for a bogey-free card.

While several of the marquee players in the field haven’t fared well this week, the hottest player on the planet kept Burns within his sights with a late surge Friday afternoon.

Johnson moved up 10 spots with his 4-under 67 on Friday, which was only one shot off the low round of the day set by Burns and three others. He was 1 over through five holes of his second round before finding his groove, rolling in five birdies over his final 13 holes.

Johnson is 7 under through 36 holes despite having a lone birdie on the six par-5s he has played.

The 2017 event winner has nine top-10 finishes at Riviera, which Johnson said is one of his favorite stops on Tour.

“I like my position,” he said. “I’m five back, but on this golf course there’s only one guy in front of me.

No. 8 Patrick Cantlay is the only other top-10 player within the top 10 entering the weekend. He’ll enter the third round tied for ninth place at 5 under.

Brooks Koepka, coming off a victory in his last start, is another shot back at 4 under.

Second-ranked Jon Rahm of Spain birdied his final two holes to reach 3 under, and No. 4 Xander Schauffele is 2 under after a 69 on Friday. No. 6 Collin Morikawa was the only other top 10 player to make the cut, and he needed a birdie on No. 17 to hit the number along with defending champion Adam Scott of Australia.

Willie Mack III, a 65-time winner on the mini-tour circuit playing on the Charlie Sifford Exemption, also finished at 4 over.