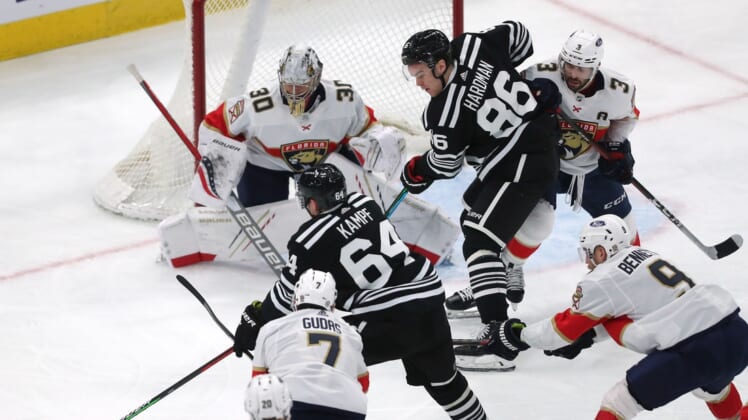 Sam Bennett scored with 52 seconds left in overtime to lead the Florida Panthers to a 4-3 win against the host Chicago Blackhawks on Thursday night.

The Panthers (33-14-5, 71 points) remained two points back of Carolina for first place in the Central Division.

With the loss, Chicago (22-22-6) are six points back of Nashville for the final playoff spot in the division.

Florida has won five of the first seven games of the season series between the two with the final matchup Saturday night at United Center.

The Panthers gave 20-year-old rookie goalie Spencer Knight his second NHL start after he replaced Sergei Bobrovsky in the third period Tuesday and made nine saves in the Panthers’ playoff-clinching win at Nashville.

Knight made 24 saves in the final two periods of play on Thursday.

Chicago rookie Kevin Lankinen, playing in his 35th game this season, kept the Blackhawks in it by stopping 35 shots.

The Blackhawks opened the scoring at 13:49 of the first period when Adam Gaudette jumped on a loose puck the Panthers could not clear and put it past a sprawled-out Knight.

Florida tied the score when Alex Wennberg tipped in a long shot from MacKenzie Weegar on a power play chance in the second.

Chicago retook the lead when Vinnie Hinostroza, who only played in nine games with Florida before being traded back to Chicago earlier this month, scored at 10:09 of the period.

At 13:09 of the second, Anthony Duclair tied the score again by following up a Brandon Montour shot that rolled off the pad of Lankinen.

Montour ended up getting a goal of his own midway through the third period, giving Florida its first lead of the night at 9:09 as Wennberg found him in the slot.

Alex DeBrincat sent the game to overtime as he scored off a cross-ice pass from Patrick Kane with 17.6 seconds left.