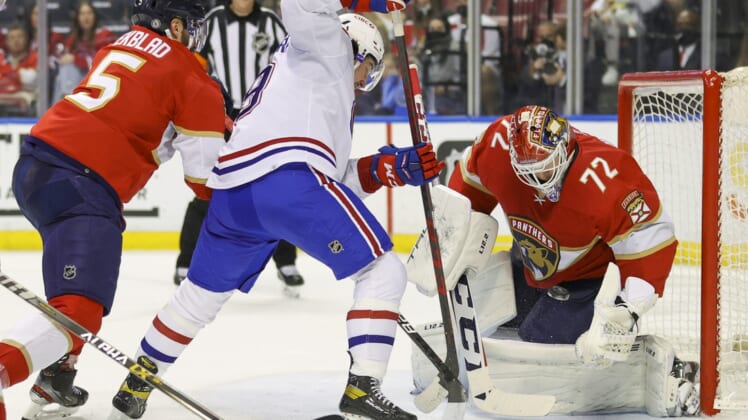 Sam Bennett scored two quick goals — each within the first 35 seconds of the first and third periods — as the host Florida Panthers rallied to defeat the Montreal Canadiens, 5-2, on Saturday afternoon in Sunrise, Fla.

The Panthers, who have the NHL’s best home record at 17-3-0, also got goals from Aleksander Barkov, Frank Vatrano and Mason Marchment.

Florida’s Jonathan Huberdeau had three assists. He has seven assists in his past two games, and he leads the Panthers in points (41) and assists (30) this season.

Montreal, which has the NHL’s worst road record (2-13-3), got goals from Jonathan Drouin and Nick Suzuki.

Drouin had missed Montreal’s previous game due to a non-COVID illness.

Due to COVID protocols, the Canadiens played with just five defensemen (instead of six) and 11 forwards (instead of 12). Of their five defenders, only one is a Montreal regular.

Florida, which had scored three goals in each of its past four periods, scored just once in Saturday’s opening 20 minutes.

In fact, the Panthers needed just 32 seconds to score on Montreal as Huberdeau threw a blind centering pass from behind the Canadiens’ net to Bennett, who scored on a one-timer. The pass by Huberdeau was made with his back to Bennett.

Montreal tied the score with 3:48 gone in the first as Drouin redirected Sami Niku’s shot for the goal.

The Canadiens took a 2-1 lead while skating 4-on-4 with 9:29 expired in the second. After Jesse Ylonen’s shot was stopped, Suzuki’s rebound went in off both posts, starting with the left one.

Barkov’s power-play goal tied the score 2-2 with 4:58 remaining in the second. After Corey Schueneman was sent off for hooking, the Panthers scored with tic-tac-toe passing: Huberdeau from the left point to Reinhart at the goal line and then to Barkov on the right side for the goal.

Florida took a 3-2 lead with 2:30 left in the second as Reinhart passed the puck from the right corner to Vatrano, who came charging in to the front of the net, reaching forward to deflect the puck past Montembeault.

The Panthers poured it on in the third as Bennett scored on a deflection just 15 seconds into the period, and Marchment — who got loose on a two-on-one rush — scored on a wrist shot off the crossbar.