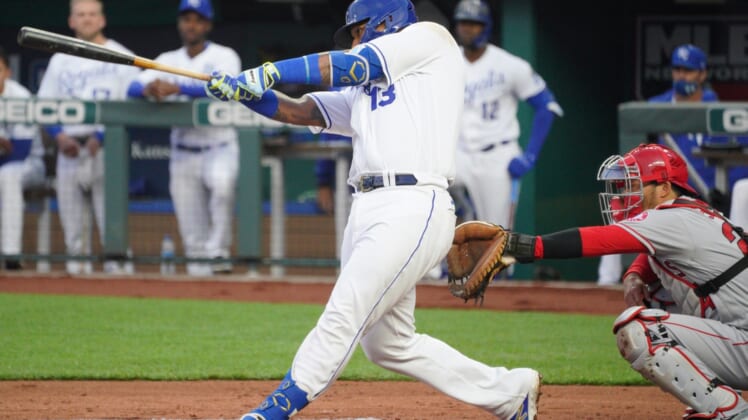 Kansas City catcher Salvador Perez picked off the potential tying run at third base with two outs in the top of the ninth as the Royals defeated the visiting Los Angeles Angels 3-2 Tuesday night.

Greg Holland’s 0-2 pitch bounced in the dirt but caromed off Jared Walsh at the plate before Perez picked it up and threw out David Fletcher before he could scramble back to the bag.

Southpaw Danny Duffy (2-0) pitched six solid innings for the second straight start for Kansas City. He gave up one run on eight hits, walking just one and striking out six. Duffy pitched at least six innings in just two of 11 starts in 2020.

The Angels are 0-3 against left-handed starters this season.

Dylan Bundy (0-1) took the loss for the Angels. He allowed three runs (two earned) on five hits over seven innings.

The Royals got a run in the first on a sacrifice fly by Carlos Santana. Andrew Benintendi took a one-out walk before Perez doubled him to third. It was Perez’s fifth straight hit after going 4-for-4 Monday night.

Santana drove in the Royals’ second run in the third, again without a hit. Whit Merrifield and Benintendi led off the inning with singles. After Perez struck out, both runners advanced on stolen bases. Santana then grounded out to shortstop, scoring Merrifield.

The Angels scored in the fifth on a solo home run by Shohei Ohtani. It was the first run allowed by Duffy this season. The Angels have homered in all 11 games. Duffy came back and struck out Mike Trout on three pitches.

The Royals were gifted a run in the bottom of the fifth. Merrifield hit a pop up that catcher Kurt Suzuki dropped in foul territory. Two pitches later, Merrifield reached with a single. He stole second and scored on Perez’s two-out single.

The Angels loaded the bases with one out in the sixth off Duffy. But he got John Jay to ground into a 3-2 force out and then struck out Jack Mayfield to end the inning and end his night.

The Angels drew within one in the eighth on a sacrifice fly by Suzuki.