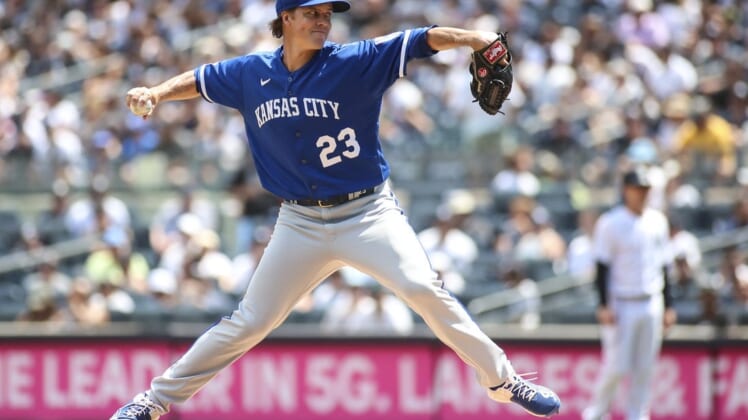 Salvador Perez hit a go-ahead three-run homer with one out in the ninth inning off Clay Holmes and the visiting Kansas City Royals rallied for an 8-6 victory over the New York Yankees Sunday afternoon to snap a five-game losing streak.

The Royals blew a late lead for the second time in the four-game series, but this time they were able to recover and earned their second win in 57 games when trailing after eight innings.

Whit Merrifield started the comeback by getting a walk and rookie Bobby Witt Jr. reached when he was hit in the hand.

Perez then gave the Royals an 8-6 lead by hammering a 1-2 sinker from Holmes (5-2) onto the netting above Monument Park in center field.

Before Holmes blew his third save in 20 chances, Anthony Rizzo hit a three-run homer off Dylan Coleman to give the Yankees a 6-4 lead in the seventh, and Hunter Dozier opened the eighth with a homer off Ron Marinaccio to pull the Royals within 6-5.

Taylor Clarke (2-1) got the final six outs. After getting two groundouts in a perfect eighth, Clarke held on in the ninth.

Kyle Higashioka hit an RBI single and LeMahieu hit a two-run homer to start the comeback in the fifth off Zach Greinke, but the Yankees ultimately fell to 55-2 when leading after eight. New York was unable to get its 70th victory and major league-leading 30th comeback victory.

Kansas City scored its first four runs in the fifth before coming back in the eighth and ninth.

Nick Pratto hit a two-run single and rookie Maikel Garcia had an RBI double after committing errors at shortstop in each of the previous two games. Merrifield hit an RBI groundout to account for Kansas City’s fourth run.

Greinke allowed three runs on five hits in five innings and remained winless against the Yankees in New York.