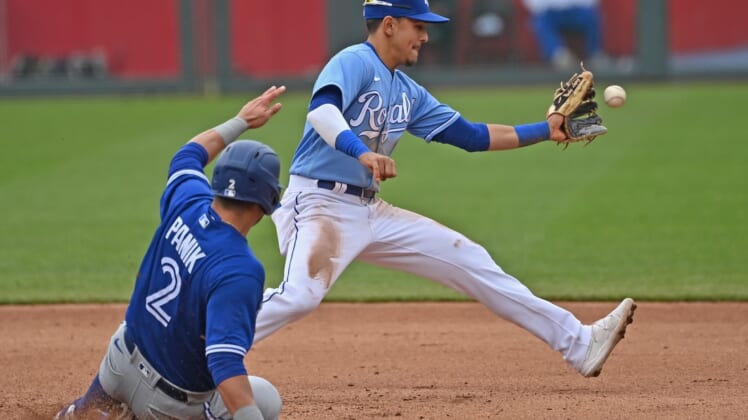 Salvador Perez homered in his second straight game to lead the Royals to a 2-0 victory over the Toronto Blue Jays in a game of missed opportunities Sunday in Kansas City. The teams combined to leave 15 men on base in the first four innings.

The Royals won three of the four games of the series.

Perez, who ended Saturday’s second game with a walk-off home run, hit his homer 441 feet into the fountains in left center.

After leaving baserunners all over the diamond in the first six innings, the Royals unloaded on the Blue Jays’ third pitcher in the seventh. T.J. Zeuch gave up three line drives with his first three pitches. Carlos Santana led off with a single, followed by Perez’ home run and Jorge Soler’s double.

Kyle Zimmer (1-0) picked up the win. Greg Holland picked up his second save. Royals pitchers retired the final 18 Toronto batters.

Both starting pitchers left the game without allowing a run. Kansas City’s Brady Singer gave up two hits in six innings, striking out six and walking three. He has not received a single run of support while he was in the game this season (three starts).

Robbie Ray allowed four hits in five innings for Toronto. He tied a career high with six walks and struck out three.

The Royals left the bases loaded in each of the first two innings. They had second and third with no outs, and the bases full with one out in the first, but couldn’t score. They loaded them with two outs in the second but came away empty.

The Royals only left two on base in the third. They were getting most of their offense as a gift from Ray. He walked two in each of the first three innings.

The Blue Jays didn’t quite have the same frustration, but they left two on base in the second through fourth innings.

While Ray continued to allow baserunners, Singer eventually found a groove. He retired nine straight batters in the fourth, fifth and sixth innings.