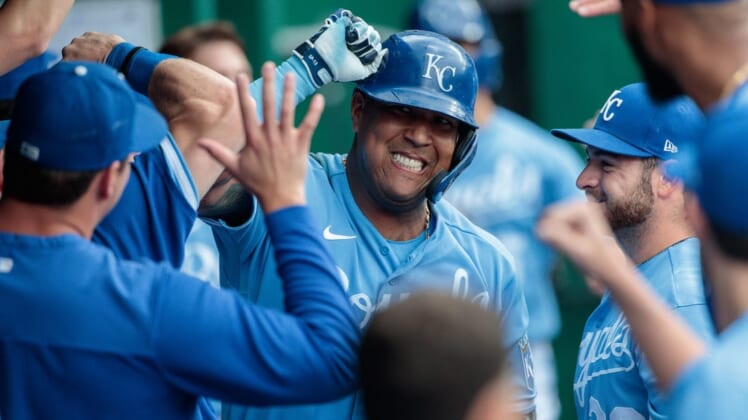 One game doesn’t turn a season around, but if there’s one guy who can do that for the Kansas City Royals, it’s Salvador Perez.

The Royals will host the Houston Astros in the rubber match of a three-game series on Sunday afternoon, and they’ll be looking for just their fourth series win of 2022. They have a chance to take the series because of Perez’s efforts on Saturday.

Perez came to the plate with two outs in the sixth inning of a scoreless tie Saturday. He was mired in a 1-for-25 slump since coming off the 10-day injured list on May 28 following a strained left thumb.

Perez deposited a fastball from Luis Garcia into the bullpen in left field, providing all the runs the Royals would need in a 6-0 victory. Perez provided insurance with an RBI double as part of a four-run eighth inning for Kansas City, which snapped a five-game losing skid.

“Salvy kind of stole the show for us,” Royals manager Mike Matheny said. “That’s the guy we want stealing the show. We want to see him come through and feel that confidence that we know he has as an offensive weapon. To have that homer, and then come back later and drive the ball for a double, it was a great day for him.”

Perez downplayed the homer, and the injury.

“Doing my job is part of the game,” he said. “There are going to be some ups and downs.

“My thumb feels good. It’s a little bit tight. Nothing is going to stop me from playing.”

Heasley could use the run support as he’s allowed exactly three runs in each of his last three starts, covering five, five and six innings.

It will be Heasley’s first time facing the Astros.

Valdez is 0-1 with a 6.75 ERA in three appearances (one start) against the Royals.

He’s been on a roll lately, winning his last four starts. He’s been an innings-eater for Houston, going at least seven frames in those four starts, surrendering six runs on 22 hits over 30 2/3 innings (1.76 ERA).

His last start was a strong one, as he allowed one run on two hits with seven strikeouts in a complete-game win at the Oakland Athletics.

“That’s not something a lot of guys do anymore,” Valdez said through an interpreter after his first career complete game. “I just tried to stay focused the whole time, just trying to get the guys out.

“It feels super great. That’s kind of one of those moments I’ve been looking for. It’s one of those goals I’ve proposed for myself, to go nine innings in a game. I accomplished it, thankfully.”