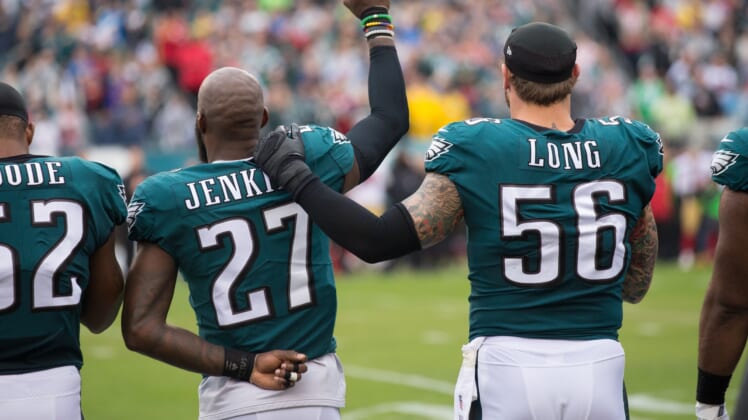 Philadelphia Eagles star wide receiver DeSean Jackson is in some hot water after sharing anti-Semitic quotes on social media over the past week.

Primarily, Jackson shared a quote that was initially attributed to Adolf Hitler. He has since apologized, but the drama continues. Here’s the latest example.

Jenkins is best known for his football prowess as a safety in the NFL. He starred with DeSean Jackson in Philadelphia before signing with the New Orleans Saints during the spring.

Jenkins has been in the news for his outspoken support of the Black Lives Matter movement and his own national anthem protests.

Though, what he shared on Instagram Friday is rather troubling.

“We can honor the Jewish heritage and trauma while staying focused on what matters. Jewish people aren’t our problem, and we aren’t their problem. Let’s not lose focus on what the problem truly is, and that’s that black lives still don’t matter in this country,” Jenkins wrote on Instagram. “Push this energy toward arresting and convicting the killers of Breonna Taylor and burning systemic racism to the ground.”

Jenkins is basically saying the issues that the Jewish people face now and faced in the past are not his concern.

“We can honor the Jewish heritage and trauma while staying focused on what matters.” So Antisemitism that still exists around the world today is not something that matters? It’s an absurd stance to take, especially given the centuries of oppression both the black and Jewish populations have faced. A united front would seem to make more sense.

As it is, Jenkins is now adding an entirely new layer to all of this. It doesn’t necessarily paint him in the best of lights, either.