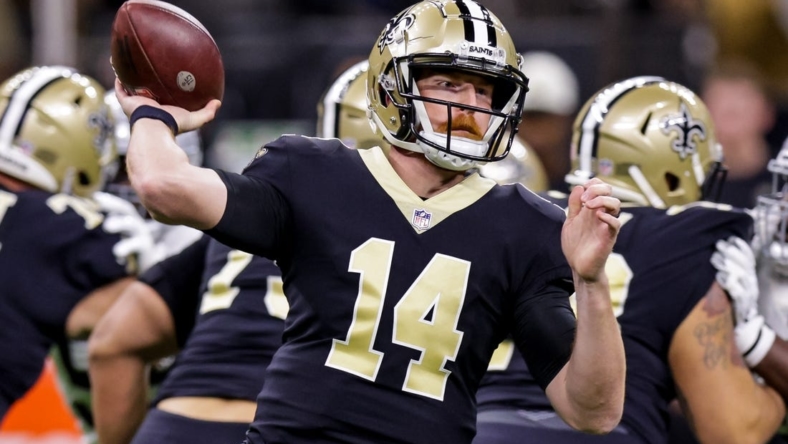 Alvin Kamara tallied 158 yards of total offense and scored his first three touchdowns of the season as the host New Orleans Saints routed the Las Vegas Raiders 24-0 on Sunday.

Kamara ran for 62 yards and one touchdown and had 96 receiving yards and two touchdown catches as the Saints (3-5) won for just the second time since the season opener.

According to the NFL, Kamara is the first player in NFL history to have 10 games with at least one rushing touchdown and one receiving touchdown in his first six seasons.

Andy Dalton completed 22 of 30 pass attempts for 229 yards, including Kamara’s touchdown receptions of 16 and 36 yards.

The Raiders’ Derek Carr threw for just 101 yards, completing 15 of 26 passes with one interception and was sacked three times before being replaced by Jarrett Stidham for the final Las Vegas possession. Josh Jacobs, who entered the game second in the NFL with an average of 105.5 rushing yards per game, finished with 43 yards on 10 carries for the Raiders (2-5).

New Orleans outgained Las Vegas in yardage, 367 to 183, and possessed the football for 34 minutes, 51 seconds, compared to just over 25 minutes for the Raiders.

On the first possession of the third quarter, Dalton connected with Kamara on a 36-yard touchdown pass that gave New Orleans a 24-0 lead.

The Saints had an 84-yard drive in the first quarter that ended with Kamara running 3 yards and a 7-0 lead.

A Raiders attempt at a fake punt on fourth and 2 early in the second quarter failed when Matthias Farley ran and lost 3 yards, giving New Orleans the ball at the Las Vegas 27 following a 15-yard penalty. That led to Wil Lutz’s 37-yard field goal and a 10-0 lead.

Dalton’s 16-yard touchdown pass to Kamara increased the lead to 17-0 at halftime, which to that point was the Saints’ largest lead this season.

The Saints drove into scoring range late in the second quarter, but Lutz was wide right on a 38-yard field goal, keeping the lead at 17-0 at halftime.