The 2021 NFL season is approaching and the New Orleans Saints are preparing for a quarterback battle between Jameis Winston and Taysom Hill. With Drew Brees enjoying retirement, all eyes are focused on New Orleans to see who becomes the starting quarterback this fall.

New Orleans rewarded both competitors with contracts this offseason. Winston signed a one-year contract worth $12 million and Hill agreed to a restructured deal that could be worth tens of millions of dollars if all goes well.

Both quarterbacks will report for training camp on July 27 with an equal shot at being named the successor to Brees. With practices fast approaching, we might now have some perspective from within the NFL about the favorite to win the job.

The Boston Globe’s Ben Volin weighed in on quarterback competition across the NFL, offering insight on where things stand in New Orleans between Winston and Hill.

“Another team with an open competition between Taysom Hill and Jameis Winston. But from what I have heard from league sources, I’m not sure it’s going to be truly open. Hill is such a unique dual threat that he’s worth trying out as the starting QB to start the season. And if the experiment fails, Payton can fall back on Winston and a more traditional pocket-based offense and move Hill back to his Swiss Army Knife role.”

Volin’s projection comes as a bit of a surprise. For months, many believed Winston had the edge in the quarterback competition. He was viewed as the favorite in January and head coach Sean Payton has heaped praise upon the young passer. 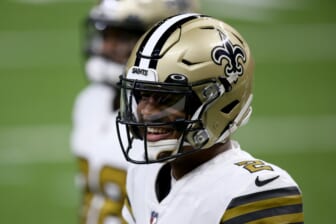 There’s certainly a case to be made for Hill. He stepped in as the starter when Brees got hurt and his athleticism makes him a dangerous weapon. Payton could get more creative with the offensive weapon under center, but there are some numbers to consider.

Hill greatly benefitted from limited success in three games against two of the worst defenses in the NFL. He does offer far more as a rushing threat, but he puts a significant cap on the Saints’ passing attack. 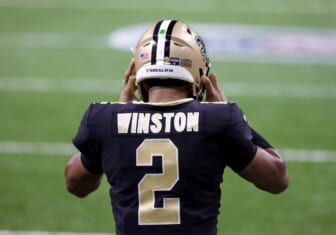 The best option for the Saints might be to name Winston as the starter. It will allow Payton to use Hill all over the offensive formation, putting him at quarterback in specific situations. One thing is for certain, both quarterbacks should see plenty of snaps this season.