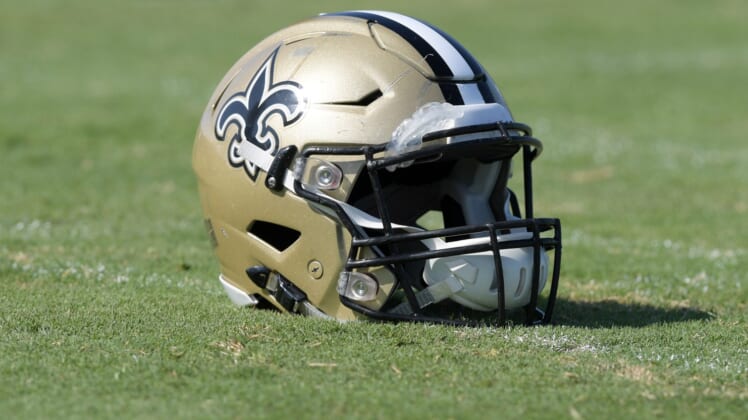 The team has been under the league’s microscope for weeks due past violations of the NFL’s safety protocols. Following the most recent incident, a team celebration after they beat the Tampa Bay Buccaneers, the league took action on Sunday.

The New Orleans Saints were anticipating discipline from the league for more than a week. After the team beat the Buccaneers in Week 10, players and coaches were seen celebrating in the locker room without masks.

It was a direct violation of the NFL’s increasingly strict COVID-19 protocols, which have ramped up in recent weeks among a surge in cases. New Orleans provided the league with all the evidence it needed for an investigation by tweeting out the video of celebrations.

As a result of the protocol violation, per ESPN’s Adam Schefter, the Saints were stripped of $500,000 and must forfeit their seventh-round pick in the 2021 NFL Draft.

After the Tennessee Titans’ outbreak, which the NFL determined was caused by not abiding by guidelines, the organization was fined. Following the announcement, the NFL made it clear future violations by teams could warrant far harsher penalties.

It didn’t take long for the league to prove its point, with the Las Vegas Raiders taking the first hit. A few months ago, head coach Jon Gruden was fined for not wearing a mask during a home game against the New Orleans Saints. Shortly after that, the NFL fined Raiders’ players for COVID-19 violations at a charity event.

The Raiders went through their own COVID-19 outbreak in Week 6, which an investigation determined was caused by players not following the safety protocols. As a result, the NFL fined the Raiders $500,000 and stripped them of a 2021 sixth-round pick.

Now, the Saints are dealing with the consequences in the NFL’s latest action.

According to Adam Schefter, the Saints are appealing the discipline. In the team’s eyes, they are no different from others across the NFL who have celebrated without masks. Unlike New Orleans, though, those teams weren’t punished.

However, it’s worth noting this team’s history with COVID-19 violations. Sean Payton was caught on video not wearing his mask properly on the sidelines in Week 2 on Monday Night Football. As a result, he was fined $100,000 and the team was docked $250,000.

The Baltimore Ravens may need to take note of the consequences the Raiders and Saints have faced. Given the outbreak in Baltimore put nearly two dozen players on the COVID-19 reserve list, it wouldn’t be a surprise if the Ravens are also hit by a fine and docked a 2021 draft pick.