Saints knock off Falcons but fall out of playoff picture 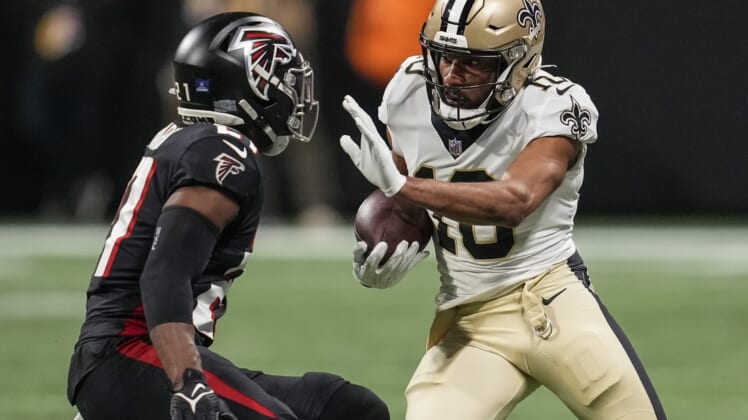 Trevor Siemian came off the bench to throw two touchdown passes as the visiting New Orleans Saints defeated the Atlanta Falcons 30-20 on Sunday.

The Saints (9-8) got a win they needed to stay alive for a wild-card playoff berth, but they were eliminated from the playoff picture when the 49ers defeated the Rams in overtime a short time later.

Siemian replaced injured Taysom Hill in the second quarter and completed nine of 15 for 71 yards. Hill completed 7 of 9 for 107 yards and a touchdown before suffering an injury to his left foot.

Alvin Kamara rushed for 146 yards on a career-high 30 carries to help the Saints possess the ball for 39 minutes, 17 seconds.

Qadree Ollison’s 19-yard touchdown run produced the only points of the third quarter and pulled the Falcons (7-10) within 24-13 at the end of the period.

Brett Maher’s 27-yard and 33-yard field goals increased the lead to 30-13 midway through the fourth quarter.

Ryan threw a 1-yard touchdown to Russell Gage to complete the scoring with 21 seconds left.

On the game’s first possession, the Saints drove 84 yards in 10 plays, capped by Hill’s 18-yard scoring toss to Adam Trautman. It marked the first time this season that New Orleans scored a touchdown on its opening drive.

Younghoe Koo kicked a 48-yard field goal, trimming the Saints’ lead to 7-3 lead at the end of the first quarter.

Then, Koo’s 54-yard field goal got the Falcons within 7-6 early in the second quarter.

Hill was knocked from the game later in the quarter. Siemian replaced him and threw a 13-yard touchdown pass to Tre’Quan Smith for a 14-6 lead.