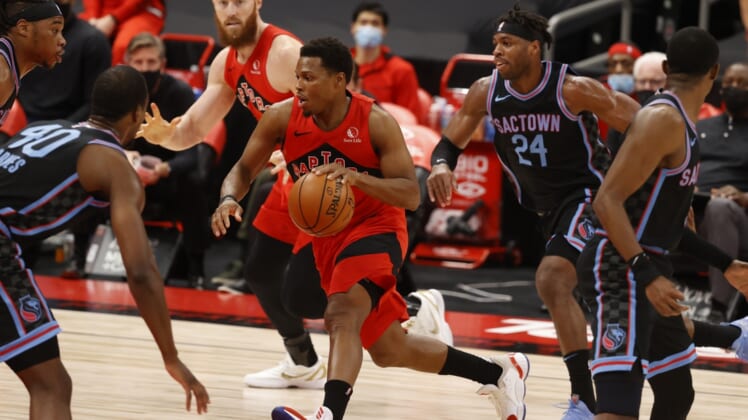 Harrison Barnes had 26 points including two crucial free throws late in the game and the visiting Sacramento Kings withstood a fourth-quarter rally to defeat the Toronto Raptors 126-124 Friday night at Tampa.

De’Aaron Fox added 24 points and Buddy Hield scored 22 for the Kings, who have won three straight games. The Raptors have lost three in a row.

The Raptors had won the previous seven meetings between the teams, including a 144-123 victory on Jan. 8 at Sacramento.

Cory Joseph and Hassan Whiteside each added 16 for the Kings and Tyrese Haliburton had 10 points and 11 assists.

Pascal Siakam led the Raptors with 32 points to match his season best. Fred VanVleet ended the game with a 3-pointer to finish with 26 points, Terence Davis had 12 points and Yuta Watanabe added a season-best 12 points.

Kyle Lowry had 17 points before being ejected for picking up his second technical foul with four seconds to play.

The Kings led by as many as 17 points early in the second quarter, increased it to 18 during the third quarter and took a 13-point lead into the fourth.

The Raptors used an 8-0 run capped by Lowry’s layup to reduce the lead to five points with 5:21 left.

VanVleet’s layup cut the lead to three with 1:50 to go. Watanabe’s layup trimmed the lead to one but Haliburton hit a 3-pointer with 44.3 seconds remaining. Siakam made one of two free throws with 37.9 seconds left.

Lowry’s layup cut the lead to two with 9.3 seconds left. Barnes then made two free throws with 7.6 seconds remaining.

Sacramento led 36-24 led after one quarter.

The Kings scored the first five points to open the second quarter to lead by 17.

The Kings increased their lead to 18 on Hield’s 21-footer with 34.6 seconds to play. VanVleet scored the final five points of the third quarter to trim Sacramento’s lead to 104-91.