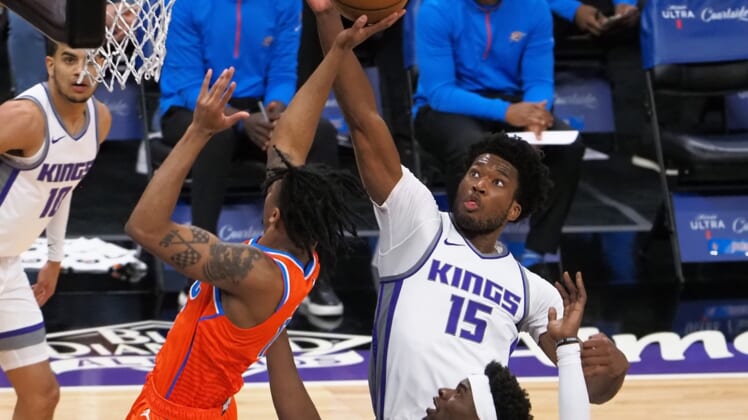 Maurice Harkless and Terence Davis scored 18 points each to lead the Sacramento Kings to a 126-98 home win over the Oklahoma City Thunder on Sunday night.

The Kings kept their faint hopes of making the play-in tournament alive with the win, their fifth in six games.

Sacramento is 2 1/2 games behind San Antonio for 10th in the Western Conference with four games to play. The Spurs, who have five games remaining, hold the tiebreaker.

The Thunder have lost seven consecutive games and 24 of their last 26.

The game was the first of consecutive games between Sacramento and Oklahoma City.

Sacramento jumped out to a quick lead, stretching the margin as high as 13 in the opening quarter thanks to 12 points from Harkless and 10 from Delon Wright.

The Kings got going from behind the arc, hitting nine 3-pointers in the first half.

They also turned up the pressure defensively, forcing the Thunder to turn the ball over seven times in the first quarter, and getting a pair of first-quarter blocks by Damian Jones.

Oklahoma City, which had just nine turnovers in each of its last three games, turned the ball over 14 times in the loss.

Sacramento hadn’t led by more than 24 at any point all season before Sunday but built a 25-point lead by late in the second quarter.The Kings led by as many as 35 in the second half.

The Kings (30-38) had seven players score in double figures, including 15 each by Richaun Holmes and Wright.

Sacramento shot 52.9 percent from the floor, helped by 7-for-9 shooting from Holmes.

Darius Bazley led Oklahoma City (21-48) with 18 points while Jaylen Hoard had a career-high 16.

While the Thunder struggled with turnovers overall, Gabriel Deck once again took care of the ball with four assists and no turnovers. Through seven games since signing with the Thunder, Deck has 19 assists and just three turnovers. However, he shot just 1 of 8 from the floor.