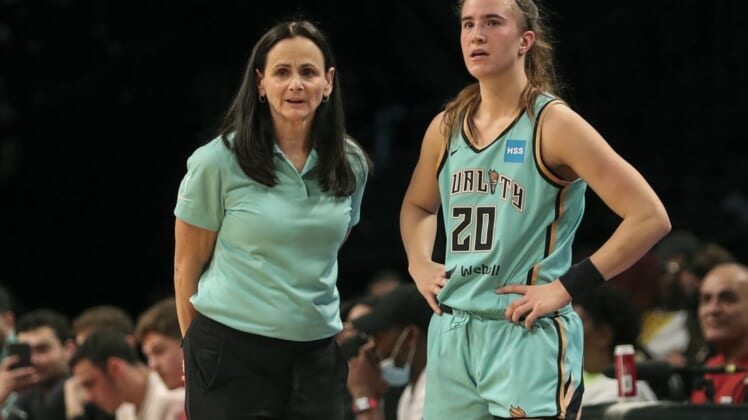 Courtney Vandersloot knocked down an open 3-pointer with a second remaining to help rally the visiting Chicago Sky past the New York Liberty 88-86 on Sunday at Brooklyn.

Vandersloot scored 20 points with 10 assists as Chicago (9-4) won for the fourth consecutive time against New York. Emma Meeseman’s reverse layup with 48.5 left put the Sky up 85-84.

The Liberty’s Sabrina Ionescu delivered her second career triple-double, scoring 27 points, grabbing 13 rebounds and dishing out 12 assists. Ionescu’s triple double was complete before the end of the third quarter.

Ionescu, who had only two points in an 83-50 loss to Chicago last month, was a different player this time for the Liberty, but still could not carry New York to the victory.

With 6:25 to play, Ionescu scored off a layup, drew a foul and hit the ensuing free throw to give New York a 77-71 lead.

But the Sky didn’t back down. Chicago had four players in double figures, including 20 points from Emma Meeseman, while Allie Quigley scored 16 points and Kaleah Cooper added 13.

The Liberty went 11 of 23 from 3-point range and got additional double-digit efforts from Stefanie Dolson (12), Crystal Dangerfield (11) and Han Xu (10).

Ionescu’s ability to make plays and a sharp-shooting effort from 3-point range propelled the Liberty to a 24-18 lead after one quarter.

Ionescu dished out six assists in the period, including a kick-out to Michaela Onyenwere, who buried a 3-pointer to give New York a 17-10 lead.

Sami Whitcomb knocked down her second 3-pointer of the quarter moments later. New York was 4 of 6 from beyond the arc in the quarter.

Chicago trailed 45-44 lead at the half before a back-and-forth third quarter that featured seven lead changes.

The Liberty took control late in the quarter and led 65-59 heading into the fourth.