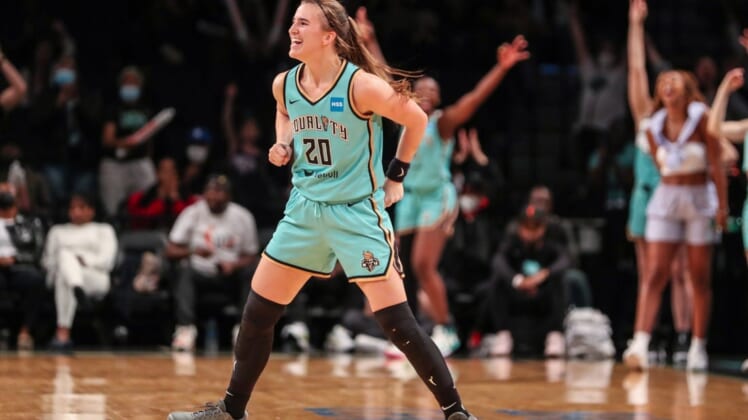 Sabrina Ionescu looks to follow up a stellar individual outing when the New York Liberty host the Washington Mystics on Thursday night.

The third-year pro recorded her second career triple-double with 27 points, 13 rebounds and 12 assists in Sunday’s 88-86 home loss to the Chicago Sky.

But Ionescu was in no mood to enjoy the accomplishment.

“I don’t care about triple-doubles. We lost, I’m really bummed about that,” Ionescu said. “In retrospect, thankful for my teammates to put me in position to achieve that.”

“We have a lot more to prove and I’m excited for the next game,” she said.

Ionescu was named WNBA Eastern Conference Player of the Week after averaging 22 points, nine rebounds and nine assists in three games. She shot 62.1 percent from the field, including 8 of 15 from 3-point range.

The Liberty’s Natasha Howard has averaged 14.4 points and a team-best 6.4 rebounds for New York, which has won four of its last six games.

Washington (10-6) has won three of its past four contests after notching an 83-65 home win over the Phoenix Mercury on Tuesday. Mystics rookie Shakira Austin registered her second double-double of the season with 16 points and 10 rebounds.

“I put in the work, I have the confidence and I’m ready to show everybody what I’ve got,” Austin said.

Austin has averaged 9.1 points and a team-best 6.4 rebounds.

The Liberty won the first meeting with the Mystics this season, 74-70 on June 3. Ionescu made five 3-pointers in that game and scored 24 points while Howard added 17 points for New York. Cloud had 17 points and eight assists for Washington, while Delle Donne and Atkins each added 15 points.