Sabres score 5 in the third to rout reeling Penguins 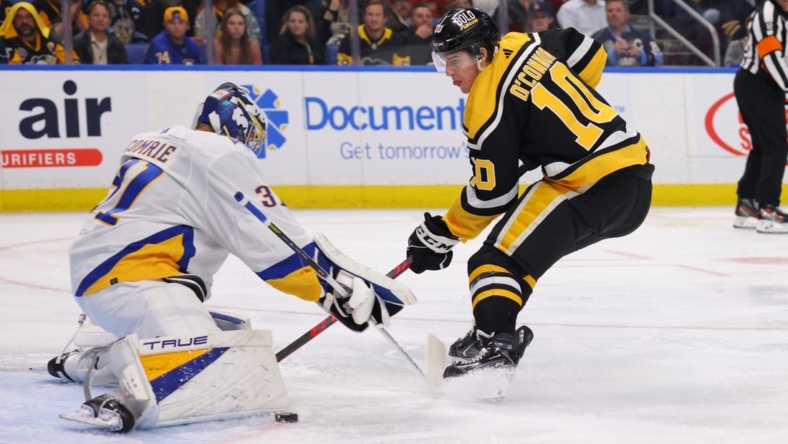 Alex Tuch scored the go-ahead goal midway into the third period and Victor Olofsson tallied twice to help the host Buffalo Sabres rally to a 6-3 victory over the reeling Pittsburgh Penguins on Wednesday.

Buffalo’s Tage Thompson scored his sixth goal in his last three games and rookie JJ Peterka and captain Kyle Okposo also tallied. Eric Comrie turned aside 18 shots to propel the Sabres to their third straight win and sixth in their last eight games.

Pittsburgh’s Jason Zucker scored a goal in the first period, Josh Archibald had his second in as many games and Jake Guentzel added a power-play tally in the third. Casey DeSmith made 27 saves for the Penguins, who have dropped six in a row overall (0-5-1) and are 1-5-1 on the road this season.

Guentzel scored his team co-leading fifth goal of the season following a nifty feed from defenseman Kris Letang to give Pittsburgh a 3-1 lead just eight seconds into the third period.

Thompson answered just over three minutes later before Buffalo forged a 3-3 tie at 6:29 of the third period. Rookie defenseman Owen Power faked a shot before sliding a slick feed to Olofsson for an easy conversion from the right circle.

Thompson entered the offensive zone on a 2-on-1 rush before sending a centering feed that Tuch deflected home to give the Sabres a 4-3 lead at 10:34 of the second period.

Okposo and Olofsson sealed the win by scoring into the empty net in the waning moments of the third period.

Evgeni Malkin administered an open-ice hit on Buffalo defenseman Rasmus Dahlin in his own end before setting up the first goal of the game.

Malkin stole the puck and skated into the zone on a 2-on-1 rush before sending a cross-slot feed to the left-handed Zucker, who one-timed a blast inside the right post at 6:28 of the first period.

Ryan Poehling skated into the offensive zone on a 2-on-1 rush before feeding Archibald on the doorstep to give Pittsburgh a 2-0 lead at 5:50 of the second period.

Peterka wired a shot through traffic to halve the deficit with 1:09 remaining of the second period.