Sabres save road trip with win over Maple Leafs 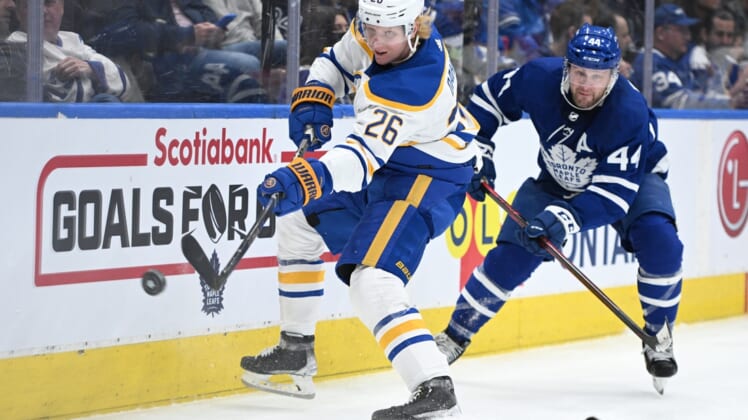 Rasmus Dahlin and Rasmus Asplund each had a goal and an assist and the visiting Buffalo Sabres defeated the Toronto Maple Leafs 5-2 on Tuesday night.

Kyle Okposo, Tage Thompson and Jeff Skinner also scored for the Sabres (27-37-11, 65 points), who took the season series from the Maple Leafs, 3-1.

Alex Tuch and Victor Olofsson each added two assists as Buffalo completed a four-game road trip with one win. Craig Anderson made 24 saves for the Sabres.

Okposo scored his 19th goal of the season at 7:25 of the first period. His shot from the right circle came on a pass from Olofsson during a power play. Rielly was off for high-sticking.

Toronto led 7-6 in shots on goal after one period.

Liljgren tied the game with his fourth goal of the season, at 2:09 of the second period. William Nylander’s wide shot banked off the end boards to Lilejegren, who shot a 14-footer that deflected in off Anderson’s pads.

Buffalo regained the lead on a power play when Thompson scored his 33rd goal of the season, at 9:11 of the second, on a 22-foot wrist shot. Tuch’s pass set up Thompson in the slot with Mitchell Marner off for tripping.

Buffalo had an 18-16 advantage in shots on goal after the second period.

Skinner scored his 31st of the season from the slot at 4:09 of the third, completing a passing play with Tuch and Thompson.

Dahlin scored his 10th of the season at 5:43 of the third. He tallied from the right circle on a pass from Olofsson.

Ondrej Palat (concussion) and Jake Muzzin (undisclosed) were out for Toronto.