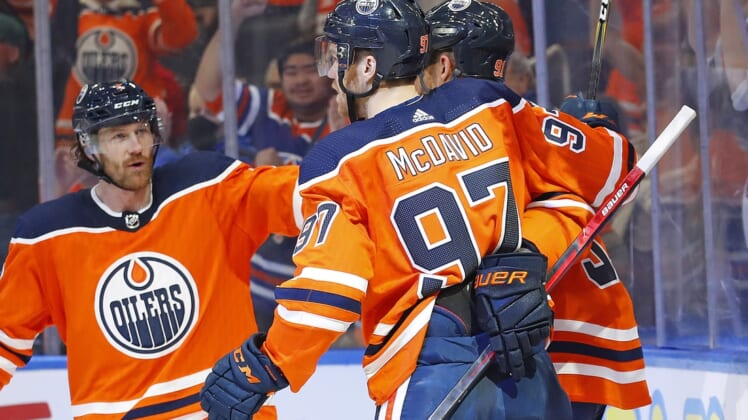 The Buffalo Sabres will try to build off the momentum from a pair of big wins when they kick off a three-game road trip with a visit to the Edmonton Oilers on Thursday.

Buffalo, which is 4-2-0 in its past six games, followed up a 3-1 victory against former captain Jack Eichel and the Vegas Golden Knights last Thursday by defeating the Toronto Maple Leafs 5-2 in the Heritage Classic in Hamilton, Ontario, on Sunday.

The Sabres entered the third period of each game tied but dominated the final 20 minutes to win.

“I just think we take the experience from it and just use it, mature from it, realize that we’re starting to take some steps here,” forward Kyle Okposo said. “I think it was definitely a positive step in the right direction. But every game’s a new game. We’re going into a couple really tough buildings on back-to-back (nights), and we’re looking forward to the next challenge.”

Thursday marks one year since the Sabres fired Ralph Krueger and named Don Granato as his replacement. While wins have been hard to come by, Buffalo’s youthful core has played better under Granato. Players such as defenseman Rasmus Dahlin and forwards Tage Thompson, Dylan Cozens, and Peyton Krebs, among others, have shown noticeable improvement.

“I just think of how far along so many guys have come. But really the predominant feel is ahead, to be honest with you,” Granato said. “The excitement ahead is how much better these guys can still get. I look at our organization compared to when I look around the league and there’s only a few organizations that are getting better every day. … So it is exciting because we have such a capacity to reach. But it’s been wild.”

The Oilers are coming off a 7-5 win against the Detroit Red Wings on Tuesday. Edmonton jumped out to a 3-0 lead in the first five minutes and led 4-2 entering the third period. The Red Wings tied it early in the final period and pulled even again after the Oilers went ahead 5-4. But Warren Foegele’s goal with 5:25 remaining put Edmonton ahead to stay.

“This week, we’ve got a couple more teams in similar positions like Detroit who are playing with nothing to lose and playing loose,” Oilers forward Evander Kane said. “We’re going to have to learn from tonight a little bit taking that same game that we had in the first here into Thursday.”

Edmonton has won three in a row after going 2-5-1 in its previous eight games. The Oilers have scored at least four goals in each of the three wins.

Forward Jesse Puljujarvi is expected to return for the Oilers after missing the past month with a lower-body injury. Goalie Mike Smith, who has been relegated to backup duties the past two games after recovering from a stomach bug, could make his first start since March 5.