Sabres knock off Penguins in shootout 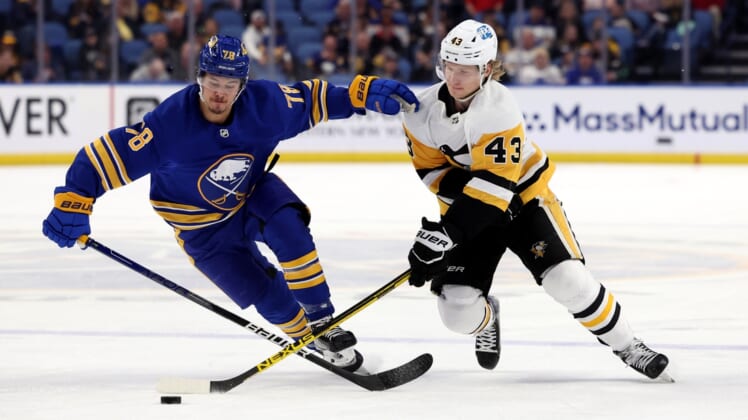 Tage Thompson, who scored twice in regulation, and Alex Tuch scored in the shootout to give the Buffalo Sabres a 4-3 win over the visiting Pittsburgh Penguins Wednesday night.

Sabres goaltender Craig Anderson stopped both shooters he faced in the shootout and made 23 saves through the end of overtime.

Zemgus Girgensons also scored for the Sabres, who have won three in row for the first time since the opening three games of the season.

Sidney Crosby and Evgeni Malkin each had a goal and assist, Kris Letang scored, and Bryan Rust had two assists for the Penguins, who had won three straight.

Pittsburgh goaltender Casey DeSmith made 30 saves and stopped only Casey Mittelstadt in the shootout.

Thompson got the only goal of the first. He carried the puck into the Pittsburgh zone and fed it to Samuelsson behind the net. Samuelsson passed it back, and Thompson beat DeSmith from the right circle at 17:15.

On a power play that carried over from late in the first, Crosby tied it 1-1. Off the rush, Rust, from the right point, passed to Crosby racing down the left edge of the slot. Crosby feathered the puck between Anderson’s pads 26 seconds into the second.

Girgensons restored Buffalo’s lead at 15:56 of the second. He had the puck behind the Penguins net but lost his handle on it. Kyle Okposo followed up and fed Girgensons, who had curled out to the right hash marks. Girgensons slammed it home far side to make it 2-1.

With 1:14 left in the second, Malkin forged another tie. From deep, he tossed the puck toward the crease. It pinballed off Anderson, off Sabres defenseman Henri Jokiharju and between the goalie’s pads.

Thompson made it 3-2 at 1:01 of the third. Tuch carried the puck behind the Pittsburgh net. With DeSmith guarding against a wrapround, Tuch found Thompson across the grain for a gaping net.

Letang tied it 3-3 at 15:04 of the third on a power play. His shot from the right hash marks sailed past Anderson’s glove.