Sabres glad to welcome back Casey Mittelstadt vs. Senators 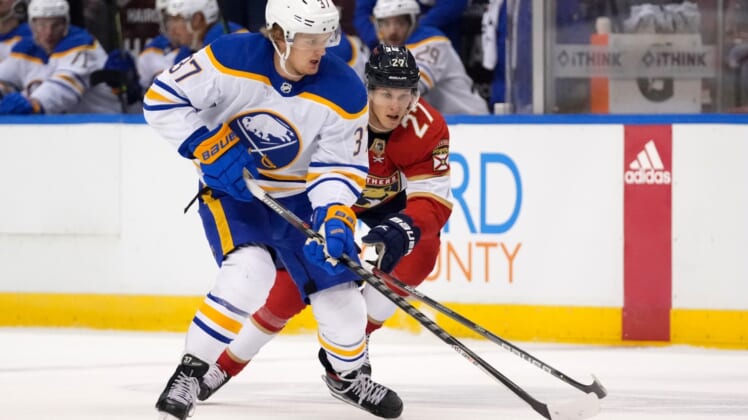 The Buffalo Sabres will get a boost to their lineup with the expected return of Casey Mittelstadt when they visit the Ottawa Senators on Tuesday.

Mittelstadt has been out since Dec. 8 following surgery for an upper-body injury, missing 16 games. It was the second lengthy absence for the 23-year-old center, who was out for 21 games with an upper-body injury sustained back on Oct. 14. The most recent injury was in the same general area as the first, but a different spot.

He returned on Dec. 2 and played three games, scoring one goal.

“You come back, you get hurt right away again. It’s not a good feeling,” Mittelstadt said. “You’re so excited to be back and finally have the adrenaline of playing and being around the guys, then it gets taken away from you. I think it puts things into perspective.”

His return will be a welcome one for a young Sabres squad who has struggled for consistent results. Buffalo is 3-2-1 in its past six games after beating the Philadelphia Flyers on Saturday. It’s one of their better stretches in a season in which they’ve only won consecutive games three times, something they’ll try to do again against Ottawa.

The offense has shown signs of life in recent outings, scoring at least three goals in four of their past six games. But while they’ve been able to put the puck in the net and build leads, turning those leads into wins has been an issue. Twice within the past week they held a lead after two periods, only to go 0-1-1 in those games. They also led by two goals heading into the third period against the Boston Bruins on Jan. 1 but lost in overtime.

“The results aren’t there yet but we haven’t even been healthy yet,” Sabres coach Don Granato said. “So to battle through this and stay close. … You’re always, close, close, close and then it turns, and everything becomes easy. We’re not to that point yet but we’re going to get there. I think the guys have shown that, to me.”

The Senators will try to get back on track after snapping a three-game skid with a 2-1 win against the Columbus Blue Jackets on Sunday. Ottawa’s slide began with a 3-1 loss to the Sabres last Tuesday.

“(The Blue Jackets) were pushing, but we just took care of the inside of the ice, especially in our zone,” Senators coach D.J. Smith said. “… The first period, it looked like Columbus was really skating and we weren’t, but we hung on and got some timely goals and we found a way to check ourselves to a big win.”

Smith recently moved Tim Stutzle from wing back to center, where he played earlier this season out of necessity when injuries down the middle plagued the Senators. The second-year forward, who has 19 points (seven goals, 12 assists) in 34 games, has shown a calmness and confidence at center, notably on the game-winning tally against Columbus.

“I’m trying to make as many calm plays as I can because if you watch the best players in the league, they have so much poise when they get the puck,” he said. “And I’ve just tried to bring that to my game.”