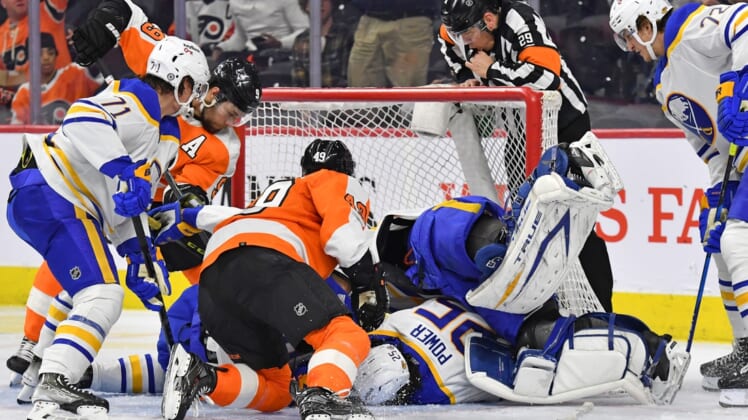 Victor Olofsson and Tage Thompson each had two goals and the Buffalo Sabres swept a back-to-back home-and-home set with a 5-3 win against the host Philadelphia Flyers on Sunday.

Rasmus Dahlin and Peyton Krebs each had two assists and Dustin Tokarski made 32 saves for the Sabres (29-38-11, 69 points), who defeated Philadelphia 4-3 in Buffalo a day earlier.

Hayes gave Philadelphia a 1-0 lead at 1:16 of the first period. He pushed the puck out of defenseman Owen Power’s skates in the slot and skated to the right side of the net, where he lifted the puck over Tokarski’s pad.

Olofsson tied it 1-1 with a power-play goal at 8:36. Dahlin stared straight ahead from the center point before sending a no-look pass to Olofsson in the right circle for a one-timer that went under Sandstrom’s glove.

Anders Bjork capitalized on a bad line change by the Flyers to put Buffalo ahead 2-1 at 17:34, taking a feed from Dahlin at the Philadelphia blue line before skating to the slot for his first goal since Dec. 14.

Cates tied it 2-2 off a scramble in the crease at 1:20 of the second period. Officials called a penalty shot for the Flyers after Power covered the puck in the crease, but video review showed the puck hit Power’s knee and crossed the goal line before he covered it.

Olofsson snapped another one-timer from the right circle in the final seconds of a power play at 9:43 of the period to make it 3-2 Sabres.

Thompson extended Buffalo’s advantage to 4-2 when he walked into the slot untouched at 14:22.

Zack MacEwen narrowed it to 4-3 at 14:07 of the third period when he pushed in a rebound on the doorstep.

Thompson scored into an empty net with 32 seconds remaining to make it 5-3.