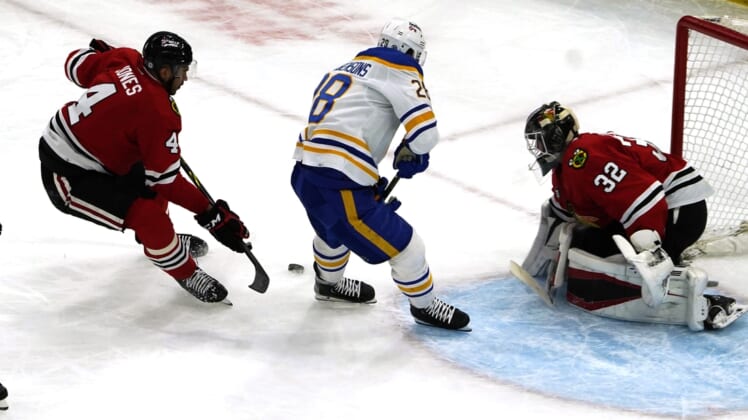 Tage Thompson broke a tie with 12 seconds left in the third period to give the visiting Buffalo Sabres a 6-5 comeback win against the Chicago Blackhawks on Monday.

Thompson broke his stick on a shot from the left circle during a power play, the puck bouncing off the end boards and hitting Chicago goalie Kevin Lankinen’s skate before rolling into the net.

The Blackhawks led 4-0 early in the second before the Sabres rallied.

Victor Olofsson had two goals and an assist while Thompson and Alex Tuch each had a goal and an assist for the Sabres, who are 4-0-2 in their past six games. Vinnie Hinostroza and Kyle Okposo added goals and Rasmus Dahlin and Dylan Cozens each had two assists.

Alex DeBrincat notched a goal and an assist and Jonathan Toews, Sam Lafferty, Calvin de Haan and Seth Jones also scored for the Blackhawks, who blew a multi-goal lead and lost for the second straight game.

Dylan Strome and Dominik Kubalik each had two assists, and Lankinen made 31 saves.

de Haan gave the Blackhawks a 1-0 lead at 7:53 of the first period. Taylor Raddysh faked a shot from the slot before dishing to an open de Haan at the right faceoff dot.

Lafferty made it 2-0 at 13:44 of the first when he tipped a point shot from former Sabre Jake McCabe.

Toews extended it to 3-0 on the power play, with a drag around defenseman Mattias Samuelsson before backhanding it stick side over Tokarski’s arm at 16:55 of the first.

Seth Jones pushed the gap to 4-0 at 1:21 of the second period when DeBrincat found him streaking into the slot uncovered.

Olofsson got the Sabres on the board at 4:50 of the middle period, rifling a one-timer from the right circle on a power play.

Olofsson narrowed it to 4-2 just 5 1/2 minutes later. Jeff Skinner’s backhand feed from behind the net hit Strome’s skate before landing on Olofsson’s stick in the left circle.

Okposo brought Buffalo to within one at 14:32 of the second. Cozens’ shot deflected off his skate and then off the skate of Blackhawks defenseman Erik Gustafsson before going past Lankinen’s right pad.

Hinostroza tied it 4-4 at 2:39 of the third period, cleaning up a rebound of a Rasmus Dahlin point shot from in front.

DeBrincat put Chicago in front 5-4 on a power play at 10:56, sneaking a shot short side from the left circle.