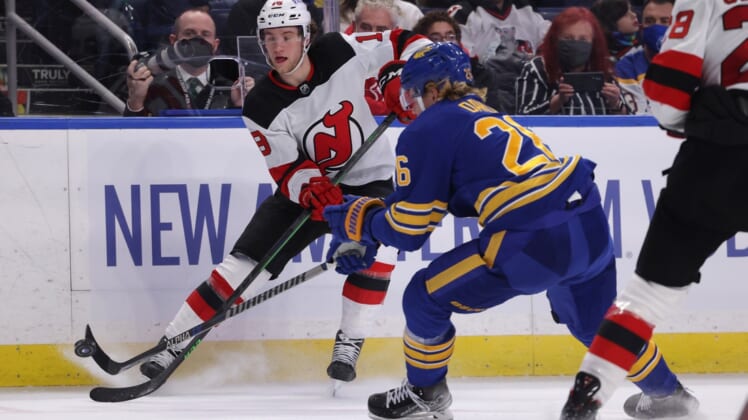 The Buffalo Sabres eye a fourth win in their past five games when they visit the New Jersey Devils on Thursday in Newark, N.J.

The focus for the Sabres (29-38-11, 69 points) this season has been all about growth and development as they look to build consistency and success.

Tage Thompson, 24, is four goals away from 40 on the season.

Rasmus Dahlin, 22, hit the 50-point mark on the weekend, becoming the first Buffalo defenseman to reach the mark since 1995-96.

They’re also getting results from their veterans, as Jeff Skinner is five points shy of matching his career high of 63 while Kyle Okposo reached the 20-goal mark for the first time 2015-16.

“Absolutely you play to win. That’s a priority,” coach Don Granato said. “And still, everything we do is progressive. … I mentioned a lot to the group about how developing offense is a process. It’s a long process. We continue to evolve in that process and there are things we did last weekend that we put different points of emphasis and we’ll do the same going into (Thursday). We’ll just keep pushing forward.”

The Sabres’ power play has found a groove of late, connecting at a 41.2 percent clip (14 of 34) over the past 13 games after converting just once on 24 opportunities in their previous nine games.

“One really key component is Victor Olofsson is doing really well and his wrist is back to what I would say normal. He’s an added threat there,” Granato said. “Two units is huge. Our second unit has been good. … We’ve really concentrated on spreading the wealth as far as skill. The joke behind the scenes is there isn’t a second unit because we think both can score. We set it up that way and I think we’ll be able to do that in the future is have that.”

Olofsson scored twice on the power play in Buffalo’s win against Philadelphia on Sunday, bringing him to 20 goals on the season for the second time in the past three seasons.

The Devils (27-42-7, 61 points) are back home after going 3-1-1 on a five-game road trip out west, which concluded with a 3-2 triumph Monday against the Vegas Golden Knights.

“We just have to learn what brought us the wins,” forward Pavel Zacha said. “Being structured in the defensive zone, playing really good, that’s the only way you’re going to win in this league. I think that’s something we have to focus on and bring for the last six games of the season.”

Forward Jesper Boqvist had three goals and four points on the trip, including goals in each of the past two games. The 23-year-old has been held off the scoresheet just once in the past five games, his best offensive stretch of the season.

“It was a fun trip, for sure, being with the team that long,” he said. “For me, personally, it was a pretty good trip, I feel like. Got some goals and stuff, and it’s always fun. We won a lot of games, too, so that’s most important.”