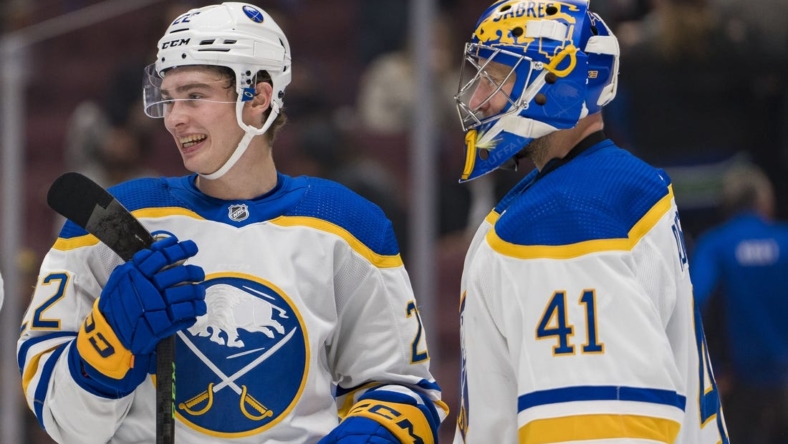 The Buffalo Sabres find themselves in a better position than in recent seasons after winning three of four games on a trek through the Western Conference.

Buffalo opens a four-game homestand against the Montreal Canadiens on Thursday night in a matchup of Atlantic Division teams trying to join the upper echelon.

Less than 10 games into the new campaign, the Sabres are doing a better job of it so far.

On a 10-day journey through the province of Alberta and the Pacific Northwest, Buffalo coach Don Granato’s bunch managed to beat a pair of playoff clubs from last season — the Edmonton Oilers and Calgary Flames. They also split a pair against the Vancouver Canucks and Seattle Kraken.

However, in the sandwich games of the trip, the club lost two defensemen — Henri Jokiharju and Mattias Samuelsson — and quickly had to call up Kale Clague and Lawrence Pilut for reinforcements.

Paired with Casey Fitzgerald on Tuesday in Seattle, Pilut logged 14:50 of ice time and went minus-1 in his season debut. Pilut played 46 games with the Sabres from 2018-20 before going to the KHL for two seasons.

Granato said Pilut and Clague, both left-handed shots, were key parts of their depth plans.

“We had a group of defensemen that we signed over the summer, Kale being one of them, and we really liked all of them,” Granato said. “This year, we need Lawrence up, we need Kale up, and we’re glad to have them in our organization. When needed, I know they’re going to be ready.”

Buffalo’s Rasmus Dahlin was awarded the NHL’s First Star of the Week on Monday after becoming the first defenseman in league history to record a season-opening goal streak of at least five games. The streak was snapped in the 5-1 loss to the Kraken.

Meanwhile, the Canadiens are off to a slow start. They entered Wednesday tied with Tampa Bay for last place in the tight Atlantic, already six points behind the first-place Boston Bruins.

But they went 2-2-0 on their recent four-game homestand, with a 3-2 overtime win against Pittsburgh and a 6-2 victory over Arizona before losing to Dallas and Minnesota to round out the set.

Their four-game road trip that kicks off in Buffalo will feature a return match against the Wild plus stops in St. Louis and Winnipeg. The last three are teams expected to be in the playoffs or in strong contention.

Montreal’s former star goalie Carey Price, the backbone of most of the club’s success since debuting in the 2007-08 season, held a press conference Monday and said he has no timetable on his future.

“I don’t have a plan to retire right at this moment. Right now, my goal is to just be pain-free from day to day,” Price said. “My first priority is just to get my body in a place where I’m pain-free in my day-to-day living and go from there.”

The 35-year-old Price is on long-term injured reserve with a knee injury after appearing in just five games last season.

Juraj Slafkovsky, 18, the overall No. 1 draft pick in the summer, was at practice after missing two games with an upper-body injury.