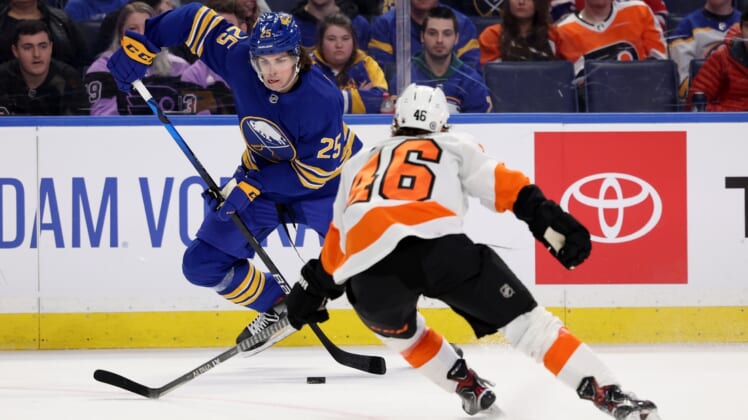 The Buffalo Sabres will look to sweep a home-and-home series against the Flyers on Sunday when the teams reconvene in Philadelphia.

The Sabres (28-38-11, 67 points) overcame an early two-goal deficit in the first period en route to a 4-3 victory over the Flyers on Saturday. Buffalo scored all four of its goals in the second period.

“I thought that spoke volumes about where we’re at and where we’re going as a team,” forward Kyle Okposo said. “And I just love the way that we came out in the second period and we just weren’t going to be denied. … We just keep chugging along and keep playing the right way and playing our game. We didn’t let them dictate anything.”

Okposo scored to reach 20 goals in a season for the first time since 2015-16 with the New York Islanders. The veteran has 43 points on the campaign, his highest total since recording 45 in his first season with the Sabres in 2016-17.

“It’s a nice number, for sure,” Okposo said of his goal total. “It’s my first time in Buffalo doing that. Yeah, it’s been a fun year to watch this group grow and to have feel like I had a hand in it and to feel like I’m a part of it. And it’s been just a ton of fun playing with these guys. (Coach Don Granato) came in and allowed me to just play free and use the skills that got me here and that I’ve used my whole career. And so, yeah, definitely a nice feather in the cap.”

“You’re never just going to control the play all the way through the game,” Philadelphia interim coach Mike Yeo said. “I think sometimes, we have the tendency of thinking that we’re just going to go out and poke a puck by a defenseman and then all of a sudden get a 2-on-1 opportunity and turn it into a goal.”

Philadelphia’s season-long struggles past the first period continue to plague the team. The Flyers have been outscored 11-1 in the second period during their four-game skid.

“I just think it’s a combination of things,” Travis Konecny said. “We’re just not working as a unit. We’re kind of spreading out the ice and not working together and it just kind of makes everything harder on the D, harder on the forwards. Just kills momentum. … It’s on us to fix that, nobody else. You’ve just got to go out there and try to straighten out the mistakes and get back on track or else the game gets away from you.”

The Flyers could get Cam Atkinson back in the lineup Sunday. The forward has missed the past two games with a lower-body injury.