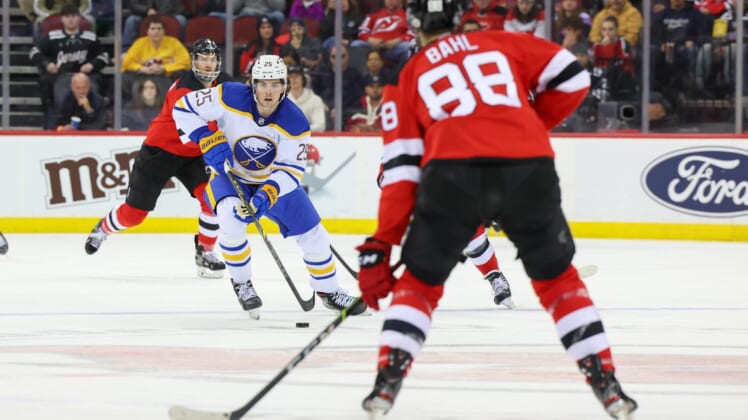 Rasmus Dahlin had a goal and an assist to help the visiting Buffalo Sabres to a 5-2 win against the New Jersey Devils on Thursday.

Owen Power scored his first NHL goal, Victor Olofsson had three assists and Tage Thompson had two assists for the Sabres (30-38-11, 71 points), who have won three in a row. Craig Anderson made 29 saves.

Jesper Boqvist and Nikita Okhotiuk scored and Andrew Hammond made 23 saves for the Devils (27-43-7, 61 points).

Kyle Okposo opened the scoring with a short-handed tally at 11:53 of the second period when he took a pass from Dahlin and shot from just outside the Devils’ blue line, a long-range shot that went under Hammond’s glove.

Alex Tuch doubled the lead with the Sabres’ second short-handed marker on the same penalty just over a minute later. Olofsson stole the puck in the defensive zone and skated down the ice for a chance that was saved by Hammond, but Tuch was there for the rebound, backhanding it five-hole to make it 2-0 at 12:40.

Dahlin pushed it to 3-0 at 17:58. Olofsson sent a pass through Tomas Tatar’s legs to an uncovered Dahlin in the right circle for a one-timer, with his shot hitting Devils forward Dawson Mercer and redirecting into the net.

Boqvist got the home side on the board with eight seconds remaining in the second period. Anderson made a pad save on a chance in tight but Boqvist stayed on the puck, poking it by the goalie’s skate at the doorstep to cut it to 3-1.

Okhotiuk scored his first NHL goal in his first NHL game. He stepped into a rebound and fired from the left circle to narrow it to 3-2 at 4:59 of the third period.

Power, the 2021 first overall draft pick, took a feed from a fallen Jeff Skinner and drove the net, beating Hammond through the legs for his first goal to make it 4-2 Buffalo at 8:33.