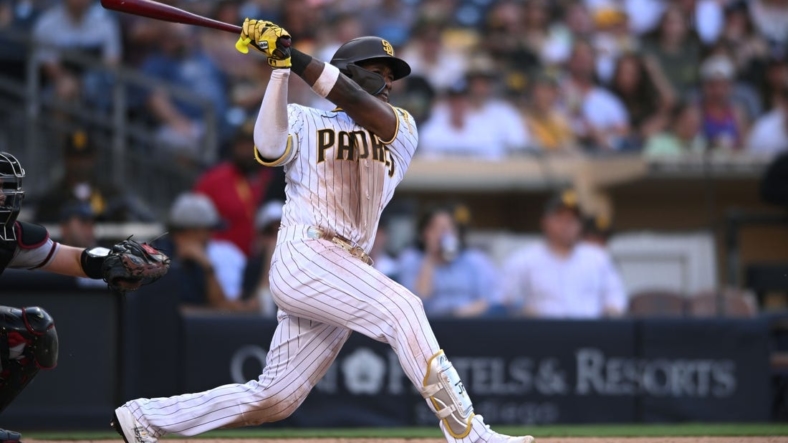 Right-hander Ryne Nelson held the Padres scoreless over seven innings in his major league debut Monday night and left fielder Stone Garrett had a double and solo homer in three at-bats as the visiting Arizona Diamondbacks defeated the Padres 5-0 in the opener of a three-game series.

The surging Diamondbacks, who scored their first four runs with two outs, have won nine of their last 11 games.

The 24-year-old Nelson was the Diamondbacks’ second-round pick in the 2019 draft. He held the Padres to four hits and no walks with seven strikeouts.

The shutout was the ninth suffered by the Padres this season. Jurickson Profar had a pair of doubles, accounting for half of the Padres hits.

Arizona took a 1-0 lead in the second off Padres starter Blake Snell (6-8) on back-to-back two-out doubles by Garrett and Alek Thomas, who got a second RBI with a sacrifice fly in the ninth.

Nelson protected the 1-0 lead until the seventh, when Garrett homered to left off Padres reliever Steven Wilson. Since being promoted from Triple-A Reno — where he was hitting .275 with 28 homers and 95 RBI — Garrett has gone 14-for-33 (.424) with four doubles and three home runs.

The Diamondbacks added two runs in the eighth off Padres reliever Nick Martinez.

Geraldo Perdomo opened the inning with a leadoff double and moved to third on a flyout. Josh Rojas drew a one-out walk and stole second to put Diamondbacks at second and third with two out. Christian Walker drove in both Perdomo and Rojas with a single to center.

Jake McCarthy drew a walk to open the ninth against Padres reliever Josh Hader. McCarthy stole second, moved to third on a grounder to the right side and scored on Thomas’ fly to left.

Snell gave up one run on four hits and a walk with 10 strikeouts in six innings. Four of Arizona’s five runs came in three innings against the Padres’ bullpen.