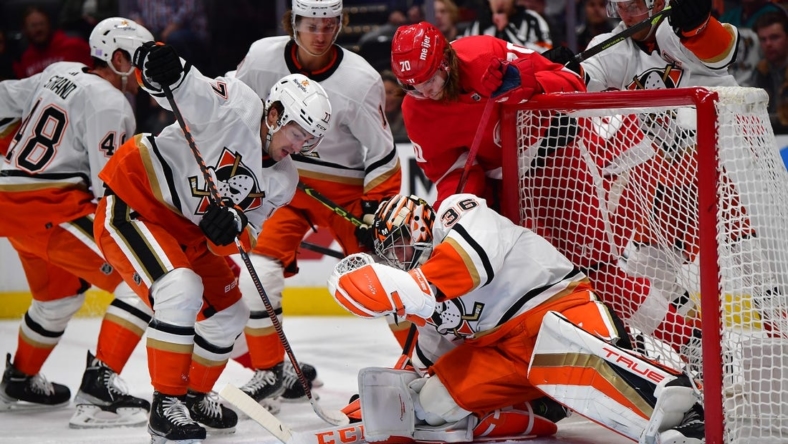 Ryan Strome scored with 50 seconds remaining in overtime after John Klingberg forced the extra period with a goal in the last minute of regulation as the Anaheim Ducks pulled off a 3-2 victory Tuesday over the visiting Detroit Red Wings.

Mason McTavish also scored a goal for the Ducks, who ended a three-game losing streak. John Gibson had 31 saves for Anaheim.

After the Red Wings controlled the puck for the first three minutes of overtime, Strome and Trevor Zegras teamed up on a give-and-go for the game-winner. It was Strome’s fifth of the season, while Zegras had two assists and now has eight on the season.

The Ducks improved to 3-0 in overtime but remained the only NHL team without a victory in regulation (16 games).

Ville Husso had 27 saves for the Red Wings, who fell to 0-2 to start a four-game road trip and have won just twice in seven games away from home.

The Red Wings took a 2-1 lead with 34.3 seconds remaining in the second period. Rasmussen brought the puck out from behind the Ducks’ goal, fought his way to the left faceoff circle, spun and fired a shot through traffic past Gibson. It was Rasmussen’s second of the season.

The Red Wings took a 1-0 lead 7:12 into the game when Berggren scored on the power play in his third game. Filip Hronek’s shot from the high slot hit Ducks defenseman Colton White in the face and Berggren collected the rebound to score from the right side of goal.

The Ducks pulled even 1-1 on the power play at 17:47 of the opening period when Adam Henrique’s shot from the right faceoff circle rebounded off Husso and was redirected into the net by McTavish for his second of the season.

Forward Sam Carrick played his first game of the season for the Ducks after undergoing hip surgery in May and took a penalty for interference in his first minute of action. He finished with five minutes of ice time.