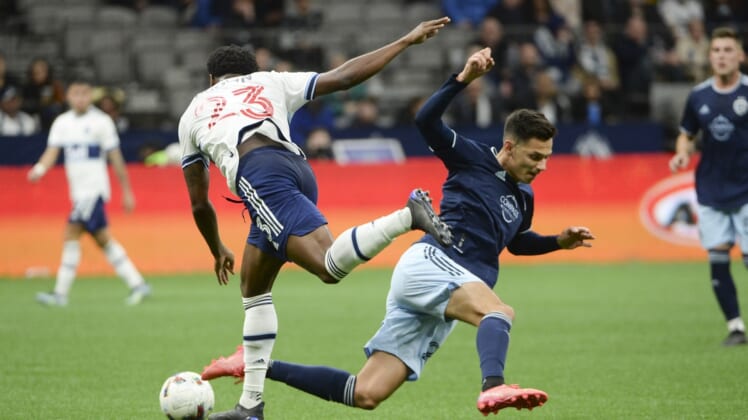 Goalkeeper Thomas Hasal made four saves for the shutout for the Whitecaps (1-3-1, four points). It was Hasal’s second shutout of the season and the fourth of his career.

The lone goal came in the 73rd minute as Vancouver’s Michael Baldisimo chipped the ball into the 18-yard box for Lucas Cavallini, with Raposo running alongside. The ball went off Cavallini’s thigh just inside the top of the 6-yard box and fell to Raposo, who toe-punched a shot from about a yard outside the left post under Melia, with the ball rolling into the far side netting.

The 23-year-old Raposo, a Canadian, was making his first start of the season and his 40th career appearance.

The first half was scoreless, with nary a shot on target nor even a corner kick.

In the 14th minute, Kansas City’s Khiry Shelton pulled a low blast from about 30 yards just wide of the left post.

Vancouver’s best chance of the first half came in the 32nd minute, when Deiber Caicedo sent a low cross from the right wing toward the top of the 6-yard box. But Melia came off his line to smother the ball just as it reached the Whitecaps’ Brian White.

Both teams ramped up their attacks after the half.

Hasal twice made diving saves, on a shot by Daniel Salloi in the 52nd minute and against Roger Espinoza in the 65th.

Hasal also stopped a left-footed shot from outside the penalty area by Marinos Tzionis in the 82nd minute and easily handled a header by Espinoza in second-half stoppage time.