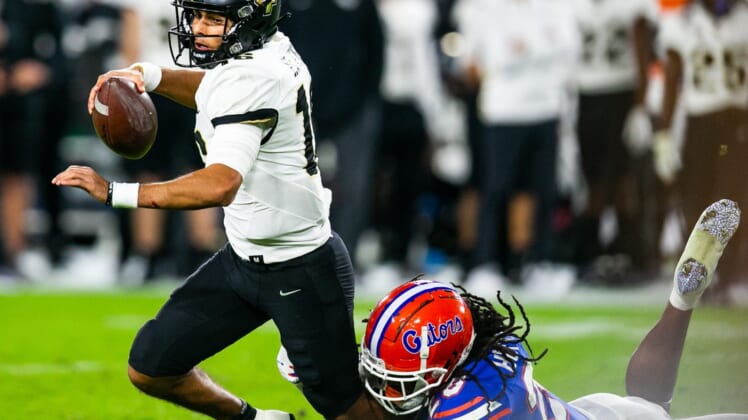 Wide receiver Ryan O’Keefe had a pair of huge plays — a 74-yard end around and a 54-yard touchdown catch — as the UCF Knights defeated the Florida Gators 29-17 on Thursday night in the Gasparilla Bowl in Tampa.

It was the first win over Florida in UCF history. In the previous two matchups, the Gators won 42-0 and 58-27.

Florida (6-7) finished with a losing record for the first time since 2017.

UCF running back Isaiah Bowser ran 35 times for 155 yards and two TDs. Teammate Mikey Keene completed 14-of-22 passes for 144 yards and one TD.

The Gators, who were six-point favorites, struggled in the passing game as Emory Jones overthrew several receivers. He completed 14-of-36 passes for 171 yards and no scores.

Gators linebacker Tyrone Harper, their fourth-leading tackler this season, threw a punch and was ejected in the third quarter. Gators receiver Justin Shorter, carted off the field in the fourth, suffered an unspecified injury.

The Gators opened the scoring on Dameon Pierce’s 2-yard run.

UCF took the ensuing kickoff and cut its deficit to 7-6 on Bowser’s 3-yard run. However, UCF’s two-point conversion attempt failed.

After Florida’s Chris Howard missed a 51-yard field goal, UCF took a 9-7 lead on its next possession, getting Daniel Obarski’s 34-yard kick.

With 1:36 left in the half, Howard was true from 26 yards, putting Florida on top. However, earlier in that drive, Jones overthrew Trent Whittemore, who would have scored easily.

There were two lead changes in the third quarter.

UCF went ahead 16-10 on Bowser’s 4-yard run up the middle. That touchdown was set up by O’Keefe’s 74-yard end around. O’Keefe faked out one potential tackler and sped past a second. Bowser scored on the next play.

Florida’s Malik Davis ran 19 yards to put the Gators on top, 17-16. Davis ran three times for 54 yards on that drive, including a 32-yarder.

Obarski’s 21-yard field goal put UCF back on top, 19-17. That drive was set up by a failed onside kick and two major penalties on Florida (taunting and a late hit).

O’Keefe then got behind Florida’s defense for his 54-yard TD catch on a lofted throw by Keene. That gave UCF a 26-17 lead with 68 seconds left in the third.