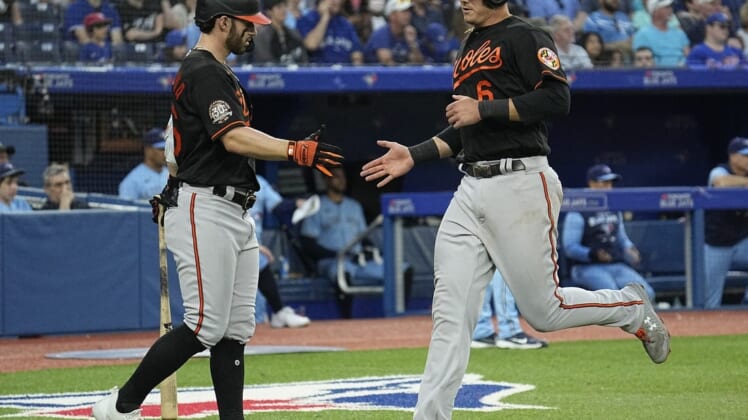 Austin Hays added a solo home run for the Orioles, who gained a split of the first two games of the four-game series.

Richie Martin led off the third with a walk and Mountcastle hit his 10th homer of the season with two outs.

Chapman and Moreno led off the bottom of the third with singles. After George Springer walked with one out, Chapman scored on Bo Bichette’s groundout.

Tyler Nevin led off the fourth with a walk and was forced at second on Ryan McKenna’s groundout. Robinson Chirinos hit an RBI double with two outs.

Chapman hit his eighth homer of the season following Raimel Tapia’s one-out double in the bottom of the fourth to tie the game at 3.

Hays led off the fifth with his eighth homer this season, 415 feet to center. Trevor Richards replaced Kikuchi and allowed Mountcastle’s double. Mountcastle took third on a groundout and Nevin brought him home with a sacrifice fly.

Jorge Mateo led off the sixth with a walk and stole second. Martin struck out on a wild pitch but reached first base safely when Mateo stole third, drawing the throw. Cedric Mullins scored Mateo an RBI single.

Lourdes Gurriel Jr. led off the bottom of the sixth with a double. Felix Bautista replaced Lyles with one out and allowed Moreno’s two-out RBI single.

Dillon Tate pitched around two singles in the bottom of the seventh.

Trent Thronton replaced Richards and allowed only an eighth-inning double in 2 2/3 innings.

Pinch hitter Santiago Espinal led off the bottom of the eighth with a double against Cionel Perez, took third on a flyout and scored on Moreno’s single. Jorge Lopez replaced Perez to finish the inning and had a perfect ninth to earn his ninth save.