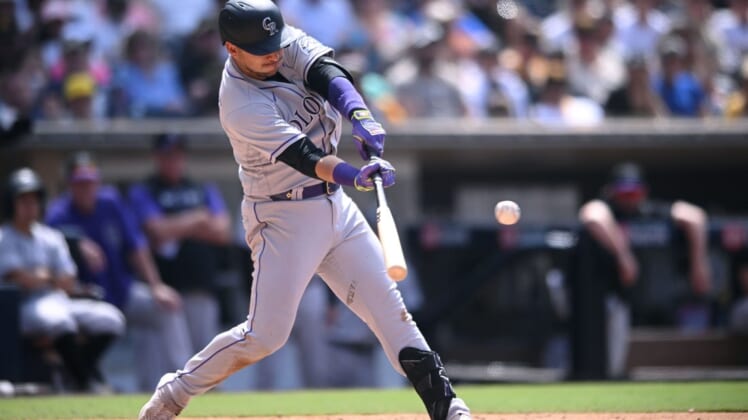 Ryan McMahon hit a tiebreaking, two-run, two-out double inside the first-base bag in the top of the eighth inning Sunday to lead the visiting Colorado Rockies to a 4-2 win over the San Diego Padres and a split of the four-game weekend series.

C.J. Cron hit a single off the glove of Padres’ reliever Luis Garcia with one out in the eighth. Jose Iglesias followed with a single to right. Garcia struck out Randall Grichuk for the second out before
McMahon sharp grounder rolled all the way to the right field corner, easily scoring pinch-runner Sam Hilliard from second with Inglesias coming all the way around from first.

The two-run eighth gave the win to Rockies struggling ace German Marquez (3-5), who gave up two runs on six hits and no walks with six strikeouts over six innings in his sharpest outing since April 9.
Daniel Bard struck out the side in the ninth for his 13th save. Garcia (4-3) took the loss.

The Rockies took the final two games of the series, winning back-to-back games for the first time in 36 games since May 4-5.

The Rockies took a 2-0 lead against Padres starter Blake Snell in the fourth, but failed in their attempts to break the game open in the fourth and the fifth.

Yonathan Daza opened the fourth with the first of his three straight singles and moved to third on a Cron single. Iglesias singled home Daza and sent Cron to third. Grichuk drove in Cron with a sacrifice fly to right.

The Rockies left two on in the fourth and loaded the bases with two out in the fifth before Snell got Iglesias to ground to third. Snell held the Rockies to two runs on six hits and two walks with seven strikeouts in six innings.

Luke Voit cut the Rockies lead to 2-1 in the fifth with his sixth homer of the season — a high drive that landed on the top balcony at Petco Park. An inning later, left fielder Daza made the defensive play of the game when he made a leaping catch at the fence to deny Ha-Seong Kim a game-tying homer.

But the Padres tied the game in the bottom of the seventh on inning-opening singles by Manny Machado and Voit that put runners at the corners ahead of a sacrifice fly to deep center by Eric Hosmer.