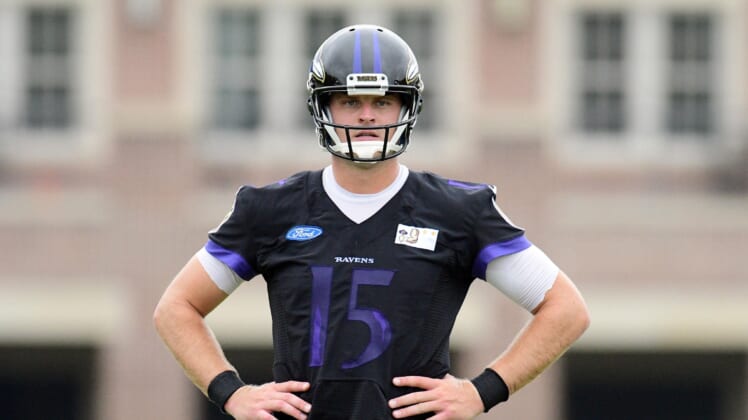 The Baltimore Ravens have no other choice than to roll with backup quarterback Ryan Mallett in training camp while Joe Flacco remains sidelined with a back injury.

With all the hype about the Ravens potentially signing free agent quarterback Colin Kaepernick, Mallett remains focused on the team.

“We’re worried about the Ravens right now,” Mallett said, via Edward Lee of The Baltimore Sun. “If he comes, cool. If he doesn’t, cool. We don’t really care about that right now.”

Mallet may not care, but he is should be worried. Specifically, Mallett ought to be concerned with his own performances. He was horrifying in practice on Friday. throwing five interceptions. Then on Saturday he launched two more into the hands of defenders.

Things haven’t exactly improved since then, either.

Quick update from watching the Ravens offense. It's ugly, there isn't 1 quarterback who can throw downfield. Defense catching everything

Should the Ravens actually strike a deal with Kap, he would likely push Mallett down the food chain. Deep down, Mallett should be feeling a bit of heat. He had this to say regarding his performances.

“Decent. I’ve got to get better. This is what training camp is for. … It’s a long training camp, a long preseason, and that’s what this is for.”

As for Kaepernick, the Ravens have been in contact with him but are reportedly not going to sign him at this time.

The best for all involved would be for Flacco to regain his health. John Harbaugh said Tuesday that Flacco will return at some point this preseason, so it appears that is well on its way to happening.