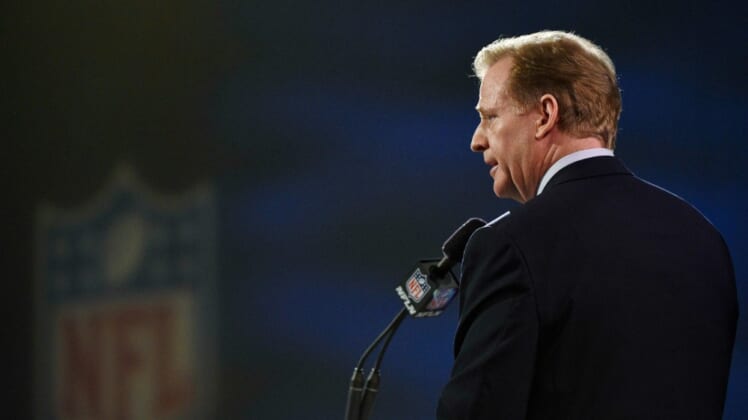 Ryan Leaf knows what a fall from grace feels like. Needless to say, he was disgusted to hear Roger Goodell call Laremy Tunsil’s tumble down the 2016 NFL Draft’s first round “exciting.”

Friday morning after the first round, Goodell made that asinine comment in an interview with ESPN’s Mike & Mike.

Tunsil was a top-three player. His floor should have been pick No. 5 to the Jacksonville Jaguars, who conceivably could have picked up a long-term solution at left tackle. Luke Joeckel hasn’t been stellar, and the team recently made the decision not to pick up the fifth-year option from his first-round rookie contract.

Unfortunately for the Ole Miss product, his Twitter and Instagram accounts were both hacked on draft day. His Twitter account posted an old video of him smoking out of a gas mask bong. His Instagram account shared an image of old texts, revealing Tunsil had allegedly taken money for rent during his college days.

With that in mind, it was a pretty brutal day for Tunsil.

Leaf, having been to hell and back again due to addiction, felt Tunsil’s pain. Furthermore, he was very disappointed about Goodell’s callous view of the very personal loss experienced by a young man who was gearing up for the biggest day of his life.

“To hear Roger Goodell say that it built suspense or entertainment, that man hugs each one of these guys when they walk out like they’re long lost family members,” Leaf told the New York Daily News Monday during a sitdown interview in Midtown Manhattan. “That’s the picture the commissioner wants to put out. If Tunsil were to fall out of grace tomorrow, Roger Goodell wouldn’t care. He’s on to the next one.”

Certainly, Leaf’s perspective on the matter has merit.

Goodell is very successful at what he does because he sells the product. He’s a terrific actor who could probably leverage his current gig into a career in politics.

He embraces the boos during the NFL Draft and wears them like a badge. Hate me, but love the NFL.

Leaf was right to call him out on the bull****.

He also commented on the person who hacked Tunsil’s Twitter account: “That’s evil to hate that much,” Leaf said.

Thankfully for Tunsil, he landed in a great spot as the blindside protector of a quarterback who just might start to shine under the tutelage of Adam Gase, the rookie head coach for the Miami Dolphins.