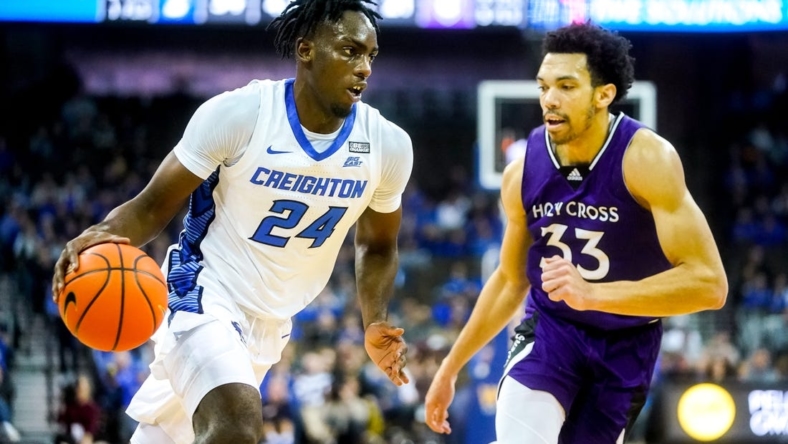 Ryan Kalkbrenner scored 22 points on 10-for-10 shooting as No. 10 Creighton cruised to a 94-65 victory over visiting Holy Cross on Monday night in Omaha, Neb.

Kalkbrenner, a 7-foot center, is now 20-for-21 over his past two games and has made 19 straight shots dating to last Thursday against North Dakota. He had seven dunks Monday and did his damage in just 20 minutes.

Creighton (3-0) scored in the 90s for the second straight game. Arthur Kaluma and Ben Shtolzberg posted 13 points apiece as 11 different Bluejays scored. Ryan Nembhard had a career-high 12 assists to go with five points.

Creighton, which earlier in the day slipped one place in the new AP Top 25 poll, had 28 assists on its 37 field goals and won the rebounding battle 42-27.

Kalkbrenner scored 10 of Creighton’s first 12 points on four dunks and a layup, and Nembhard’s 3-pointer gave the Bluejays their first double-digit lead just 4:55 into the game at 15-5.

Gates and Montgomery did most of the first-half scoring for Holy Cross to keep it close. But Creighton went on an extended 15-5 stretch, punctuated by Nembhard feeding Kaluma for a powerful alley-oop dunk that gave the Bluejays a 41-21 lead with 3:27 left in the half.

Creighton led 52-27 at halftime, which could have been even more lopsided had Gates not beaten the halftime buzzer with a 3-pointer.

Nembhard had already tallied nine assists at the half while Kalkbrenner scored 17 points on 8-for-8 shooting. Montgomery had 13 first-half points for Holy Cross with three triples and Gates scored 11.

The Bluejays earned their largest lead of the night at the end of an 8-0 run, when another Kalkbrenner dunk made it 67-33 with 14:29 still to play. Creighton played its reserves for the final 12 minutes, and the Crusaders had several 5-0 spurts but drew no closer than 24.