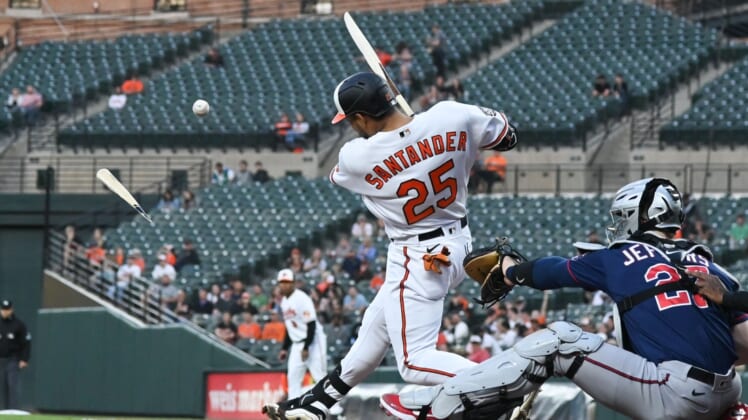 Ryan Jeffers smashed a three-run home run in the sixth inning to carry the visiting Minnesota Twins to their fourth straight victory, a 7-2 decision against the Baltimore Orioles on Tuesday night.

Another dominating performance from the Twins bullpen helped cap the outcome as Minnesota won for the 11th time in its last 12 games.

Caleb Thielbar (1-0) was the winner in relief. Thielbar and Tyler Duffey combined to retire all 10 batters they faced before Cody Stashak worked a scoreless ninth.

Minnesota began the scoring on Jose Miranda’s run-scoring double in the fourth inning off Orioles starter Bruce Zimmermann. That was Miranda’s first hit in the major leagues, coming in his second game.

Baltimore countered in the bottom of the inning when Austin Hays scored on shortstop Carlos Correa’s error.

Minnesota was back in front in the fifth on Jorge Polanco’s two-out RBI single. The Orioles tied it on Trey Mancini’s single in the bottom of the inning. Mancini was back in action after missing a couple of games with sore ribs.

Jeffers stopped the one-run-at-a-time theme with his third blast of the season with a three-run shot to center field. It came with one out off reliever Joey Krehbiel (1-3).

Three consecutive doubles — by Gilberto Celestino, Byron Buxton and Correa — to begin the ninth along with Polanco’s sacrifice fly led to another two Minnesota runs.

Minnesota pitchers combined for eight strikeouts with one walk.

Batters in eight of the nine spots in the Minnesota lineup accounted for at least one hit, with Buxton and Correa with two hits apiece atop the order.

Mancini and Hays both had two hits for the Orioles, who have been held to two or fewer runs in five of their last seven games.