Ryan Donato lifts Kraken over Devils in SO 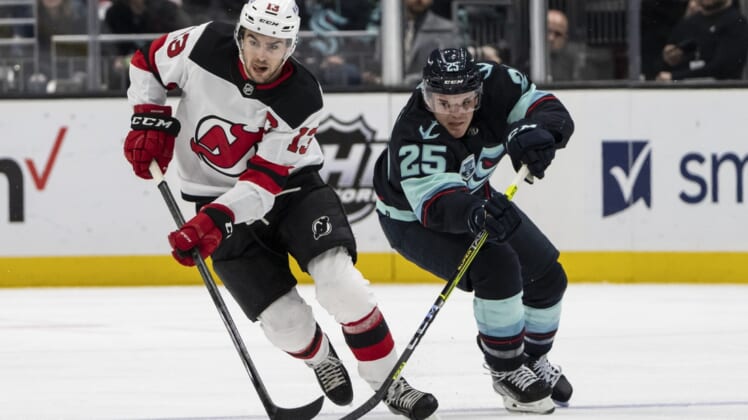 Ryan Donato scored the only goal of the shootout as the Seattle Kraken rallied for a 4-3 victory over the New Jersey Devils to cap a memorable home debut by rookie Matty Beniers on Saturday night.

Donato scored in the opening round of the shootout when he made several fakes and lifted a backhander over goalie Nico Daws.

Donato’s goal capped a night when Beniers scored his first career goal late in the second period during a power play.

Seattle goalie Philip Grubauer made 23 saves and then made pad saves on Tomas Tatar and Jesper Bratt in the shootout. The game ended when Yegor Shrangovich hit the post.

Beniers gave Seattle a 3-2 lead 97 seconds after Carson Soucy scored the tying goal. Beniers crashed the net and put the rebound of Jared McCann’s blast from the left point into the vacated left side of the net.

Seattle held the lead until 4:55 into the third when Damon Severson scored by lifting the puck over Grubauer from the right circle moments after entering the ice.

Bratt opened the scoring 3:12 in when the Devils quickly transitioned into the offensive zone. He was wide open in the middle of the right circle when he got a cross-ice pass from Andreas Johnsson and ripped a wrist shot over Grubauer’s glove.

Seattle evened the game with 9:11 remaining when Borgen ripped a slap shot from the left circle after getting a pass from Victor Rask, who was positioned at the red line.

The Devils regained the lead when Boqvist easily scored from the middle of the slot with 3:46 left in the first period.