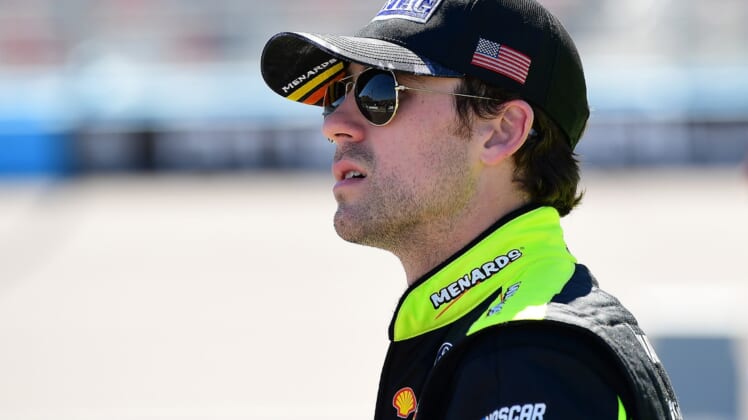 It is the best race start of the season for both drivers, who are eager to rebound after uncharacteristic tough luck in the opening three races of 2022.

Blaney, driver of the No. 12 Team Penske Ford, has only a single Top-10 finish this year (fourth in the Daytona 500) and is coming off a hard-luck 36th place showing last week at Las Vegas after being collected in an early race accident not of his own doing.

“Proud of everybody on this 12 group and definitely needed it after our early end last week at Vegas. Hopefully we can stay up front tomorrow and have a shot at it,” he added, noting he has already put his Vegas bad luck out of mind.

Hamlin, driver of the No. 11 Joe Gibbs Racing Toyota, is also hoping a good start will translate into a good finish. He won two races in 2021 and was racing in the Championship Four the last time the series competed at Phoenix, but has struggled this season with DNFs in two of the opening three races this year. His best finish is 15th at Auto Club Speedway and he’s ranked 29th in the standings heading into to the Phoenix green flag.

Hamlin is a two-time Phoenix winner, however taking the trophy in 2012 and 2019 — and he has top-five finishes in five of the last six races there. Three times he’s led at least 100 laps in a race and his 854 laps led is second only to nine-time race winner Kevin Harvick.

“Proud of our whole team for getting this thing out front, now we’ve just got to stay there,” Hamlin said.

BOWMAN AND BUSCH TALK IT OUT

Last week at Las Vegas Motor Speedway, the hometown hero Kyle Busch was leading the race when a yellow came out forcing a two-lap shootout to decide the trophy.

Alex Bowman and two of his Hendrick Motorsports teammates opted for two tires on the quick final pit stop while Busch’s No. 18 Joe Gibbs Racing team took four tires — putting Bowman on the front row for the restart and Busch behind him on the second row. Bowman went on to win while Busch — who finished fourth — expressed his displeasure on the team radio after the checkered flag with some salty language.

Multiple outlets published Busch’s angry reaction inside the car, although he was very sportsmanlike when speaking to the national television audience minutes later. Busch, who led 41 laps was frustrated that – “again” – Bowman won a race by leading only a handful of laps (16) and being at the right place at the right time.

“You go home with a trophy either way, right,” said Bowman, a Tucson native that considers Phoenix his home race. “I think we’ve dominated races that we’ve lost and that sucks. Here (at Phoenix) in 2016. A couple races at Charlotte that we’ve led a ton of laps and not won at the end. I think for me, collecting a trophy is really all that matters.”

Bowman said Saturday he took the Busch fallout in stride, even selling t-shirts with the Busch quote about him, “all luck, no talent” and donating the money raised to an animal shelter – one of Bowman’s longtime favored causes.

Earlier this week, Busch texted Bowman and the two talked it out.

“He texted me Monday night,” Bowman said. “I appreciate him texting me, but I don’t think he needed to. I understand why he was mad. We all know Kyle – he’s super passionate, fiery and gets lit up sometimes. They lost the race and he was mad about it, so I get that.

“But I do appreciate him texting me. We’ve always raced each other with respect. He’s one of the guys that I feel like I race better with than most. So, appreciative of that. We’ve never had any issues before and I don’t even that that was an issue. It was just an opportunity to make a t-shirt and raise some money for animals.”

Harvick has triple the number of wins (nine) at Phoenix Raceway as any other competitor he’ll race with in Sunday’s NASCAR Cup Series race. Next closest in the win tally is Kyle Busch with three victories.

And Harvick, 46, and his No. 4 Stewart-Haas Racing Ford team are hopeful some of that impressive past record will translate into some present day good fortune, but he refuses to equate his past record with his present expectations.

After turning in a series best nine wins in 2020, Harvick went winless in 2021 – the first time in 12 years he didn’t earn at least one victory. This year, he’s got only one top-10 showing – seventh place – at California Speedway. He’s yet to start a race from the top-20. He’s currently ranked 16th in points.

Despite his refusal to make expectations for the weekend, Harvick has to feel Phoenix is as good a place as any to right the ship. He’s only finished outside the top-10 one time there in the last 20 races (13th in 2013). He won six times in eight races between 2012-16, including four consecutive (2013-15). And even after the track re-design in 2019, Harvick has five top-10 finishes in five races, including a runner-up effort in 2020.

“I think a lot of the things that were finesse kind of went away when they put the resin and the PJ1 up there so that anybody could do that groove,” Harvick said this week at Phoenix, adding, “You just have to keep chipping away at it and try to keep yourself in contention and that is really what it is all about. We are still learning.”

And, he added, “What you have done here in the past is really irrelevant just because of the fact that it is a different car and a different style of racing. There are so many different things.

“We probably had a sixth or a 10th place last week (at Las Vegas) and had a decent car at California, we just kept having little things go wrong and just continue to chip away at it and see where it falls,” Harvick said.