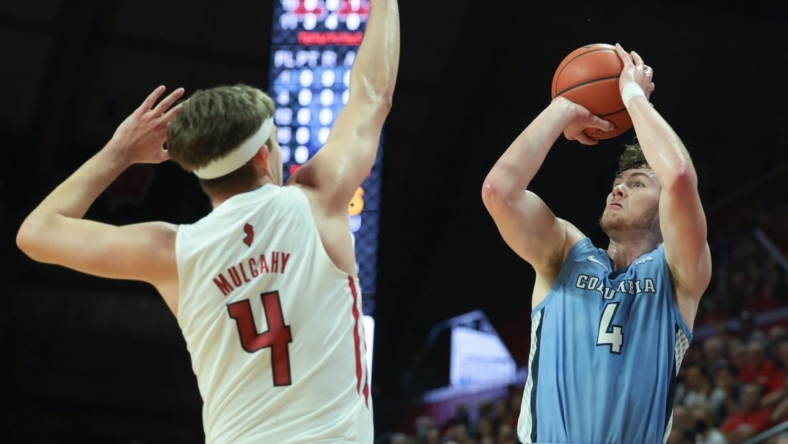 Cam Spencer scored 17 points and grabbed six steals in his Rutgers debut to lead all five starters in double figures, and the Scarlet Knights trounced visiting Columbia 75-35 to open their season Monday in Piscataway, N.J.

Rutgers scored the game’s first 15 points before Columbia closed the halftime margin to 31-21. The Scarlet Knights opened the second half on a 19-2 run to ensure it never got close again.

Aundre Hyatt had 12 points and 10 rebounds, Cliff Omoruyi posted 10 points and nine rebounds, and Paul Mulcahy and Mawot Mag added 10 points apiece for Rutgers, which outscored Columbia 44-14 in the second half.

Zine Eddine Bedri led Columbia with eight points to go with five rebounds. Rutgers’ defense stifled the Lions, holding them to 11-of-47 shooting and forcing 25 turnovers.

Omoruyi dunked seven seconds into the game, and Mulcahy and Hyatt knocked down 3-pointers during the game-opening 15-0 run. Mag added a fast-break dunk.

Omoruyi, a center who had only made two 3-pointers over his first two collegiate seasons, knocked down a triple from the top of the key to give Rutgers its largest lead of the first half, 21-5, at the 10:39 mark.

Guard Geronimo Rubio De La Rosa helped the Lions claw back while the Scarlet Knights rested their starters. He scored four points to kick off a 9-0 Columbia run that trimmed it to 25-21 late in the half. Rubio De La Rosa also finished with a team-high seven rebounds and a steal.

Spencer, a transfer from Loyola Maryland, caught fire early in the second half. He scored 12 points in the first 5:25 of the half, bookending the stretch with a pair of 3-pointers.

Spencer, who led the Patriot League in scoring and steals a season ago, went 5 for 6 from the floor in the second half. Rutgers led by as many as 43 points late in the game.

Rutgers played without Caleb McConnell, the reigning Big Ten Defensive Player of the Year, who is working his way back from a knee injury.