Rutgers has turned a corner; Nebraska trying to take the leap 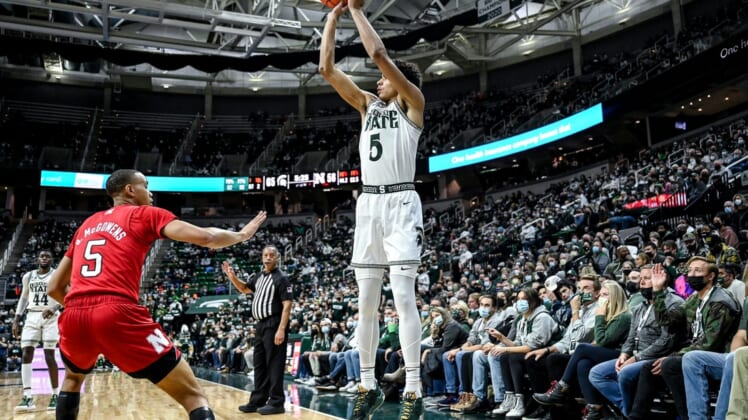 Michigan State’s Max Christie, right, makes a 3-pointer as Nebraska’s Bryce McGowens, left, closes in during the second half on Wednesday, Jan. 5, 2022, at the Breslin Center in East Lansing.220105 Msu Neb 170a

Rutgers and Nebraska do not share much athletic history. The universities are separated by roughly 1,300 miles and have been Big Ten “rivals” since just 2014.

But their men’s basketball programs, which meet Saturday in Piscataway, N.J., can commiserate with one another over their efforts to turn longtime futility into respectability.

Nebraska (6-9, 0-4 Big Ten) is the only remaining Power Five team to never win an NCAA Tournament game. Things aren’t looking up in the program’s third year under coach Fred Hoiberg, who previously turned around Iowa State’s program and spent a stint coaching the Chicago Bulls.

The Cornhuskers have lost seven of their past eight, but took No. 13 Ohio State to overtime Sunday before losing 87-79 and kept things close with No. 10 Michigan State in a 79-67 loss Wednesday.

What they do have going for them is Bryce McGowens, the program’s first five-star recruit. The freshman leads Nebraska with 15.6 points per game.

“I’ve definitely been more engaged than when I came in and when I started the season,” McGowens told reporters. “So I know that it’s in me. I just got to stay locked in.”

Rutgers (8-5, 2-1) is further along in its revival with coach Steve Pikiell at the helm. The Scarlet Knights made their first NCAA Tournament appearance in 30 years last season, won their opening game and took eventual Final Four team Houston down to the wire in the Round of 32.

After a rough start to the 2021-22 season that included losses to Lafayette and UMass, Rutgers is playing much stronger since an elongated COVID-19 break. The Knights toppled Michigan 75-67 Tuesday at home, and although the Wolverines were short-handed and have been a disappointment this year, it still counts as a milestone win for a Rutgers program that had never defeated them before.

Geo Baker scored a season-high 27 points and Ron Harper Jr. had 20. Rutgers made 20 assists on 27 baskets, its third straight game reaching at least 20 helpers as a team.

“I think it’s contagious,” Pikiell said of his team’s passing. “We share the game, and these guys know how to play together and you’re starting to see the results of that.”