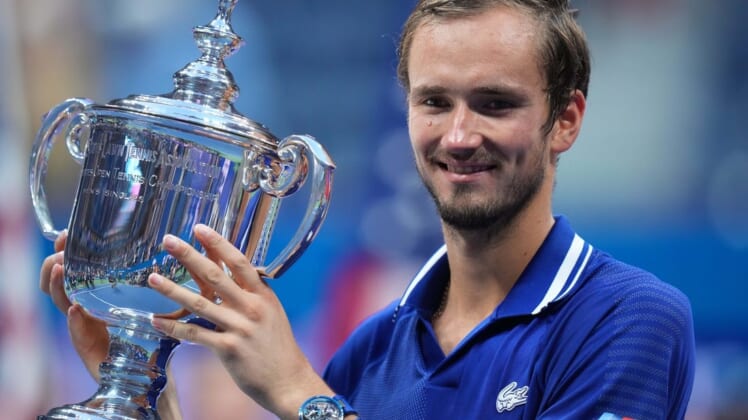 Players from Russia and Belarus will be allowed to compete in the 2022 U.S. Open under a neutral flag, the USTA announced Tuesday.

Wimbledon, which begins June 27, is prohibiting them from playing because of Russia’s invasion of Ukraine. Belarus has supported the Russian government as the fighting in Ukraine nears the end of its fourth month.

While the UTSA said in a news release issued Tuesday that it “has previously condemned, and continues to condemn, the unprovoked and unjust invasion of Ukraine by Russia,” it will allow all eligible players at the U.S. Open, regardless of nationality.

That means that on the men’s side, current World No. 1 Daniil Medvedev and No. 8 Andrey Rublev can play at the U.S. Open, which runs Aug. 29 through Sept. 11 in New York. Medvedev is the defending champion.

Among the women, No. 5 Aryna Sabalenka and No. 19 Victoria Azarenka are from Belarus, and No. 12 Daria Kasatkina is Russian. Azarenka is a three-time finalist in New York.

“Tennis has done much through Tennis Plays for Peace for humanitarian support of Ukraine. Unfortunately, the need for help only continues to grow,” said Mike McNulty, the chairman of the board and president of the USTA. “The USTA will be responding very soon with a broad set of initiatives that will include significant financial assistance and other programs to further support humanitarian relief and the people of Ukraine.”