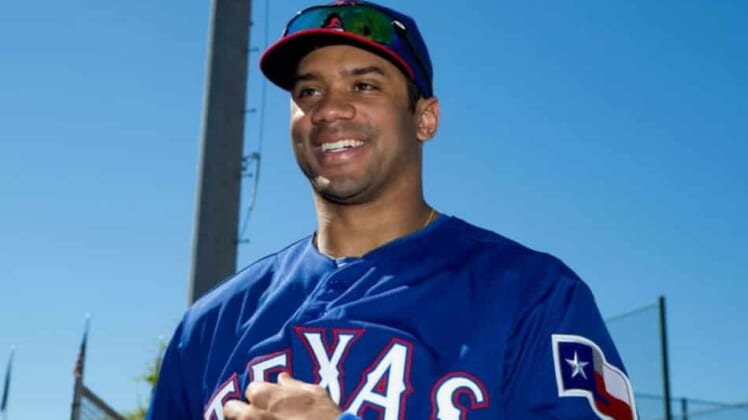 The New York Yankees recently made a trade to acquire Seattle Seahawks quarterback Russell Wilson, who will make his Yankees debut on Monday, Feb. 26.

Wilson made the announcement on social media, and he’s clearly pumped up for his chance to put on the pinstripes.

Speaking to outfielders Aaron Judge and Giancarlo Stanton, Wilson said, “I can’t wait to see you guys Feb. 26,” Wilson said. “We’re going to have some fun for that week. Hey, Aaron Judge, I know you want to throw some passes, so let’s play some ball. We’ll have a little home run derby too. Stanton, I’m coming for you, too. We’ll have some fun, baby. And hey — let’s go win a World Series. Why not? Peace.”

Head coach Aaron Boone is pretty excited to have Wilson coming into training camp as well.

From what Aaron Boone said today, it sounds like Russell Wilson will be around Yankees camp to mainly lend advice on success and leadership. And a chance for him to put on pinstripes. pic.twitter.com/kGPy5v6TEq

This isn’t the first time Wilson has participated in spring training. He’s been doing it as a member of the Texas Rangers, and clearly baseball is still a passion of his. It does make one wonder if, at some point, Wilson might be inclined to put his NFL gear on ice for good and attempt a career in baseball.

After all, if Tim Tebow can do it, why not him?